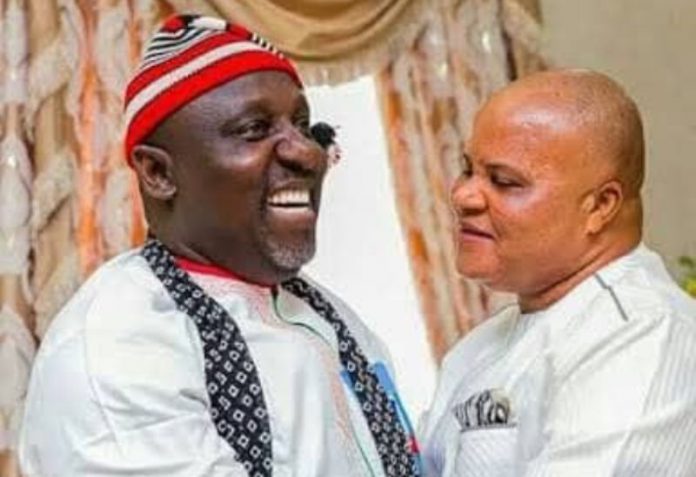 Going by what transpired last weekend during the conduct of the All Progressive Congress, APC to elect LGA executives, Trumpeta can report that it has become nunc dimitics for some of the party leaders and their followers in Imo State especially, those of Owelle Rochas Okorocha faction.
The LGA congresses of APC were held on Saturday 4th September, 2021, leading to the emergence of new officials to take care of the party at the council levels.
Even as the exercise was marred in some areas with controversies and complaints, one striking outcome of the LGA congress was the complete outster of the former governor of the state and Senator Representing Imo North in the upper national assembly, Rochas Okorocha and his followers from the party.
Others who are also suffering same fate in the party are most of his allies, especially his son in law and a popular aspirant of the APC in the 2019 elections, Chief Uche Nwosu. Not left out too is a  two time Senator of Okigwe zone, and frontline politician in Imo, Senator Ifeanyi Araraume, as well as three members of the House of Representatives; Honourables Ozuruigbo Ugonna,(OZB), Paschal Obi and Kingsley Uju.
Outcome of the conduct of the congress shows that the aforementioned leaders and their followers were neither at the venues of the various congress, nor took part in the process that has set up fresh LGA structures for the party.
The outster of these set of politicians who can be said to be of another faction in the party started when they failed to take part in the revalidation of party membership organized early this year. They had wanted the sacked leadership of the party in the state under Dan Nwafor to be incharge other than the caretaker committee led by Prince Marcon Nlemigbo.
Recall that before the 2019 election, the National Working Committee, NWC, of the party, under Adams Oshiomole had sacked the Nwafor led state exco for Nlemigbo. The Nwafor Exco enjoying backing from Okorocha has been in court to challenge the sack which prompted their sympathizers to refuse taking part in any of the programs handed by Nlemigbo group.
But with the National office giving credence and stamp of authority to whatever the Nlemigbo Exco did under the present dispensation, Okorocha and his faction have finally lost out. Petitions and even court cases instituted by Okorocha’s allies to truncate the new transition process of the party have proved fertile.
Since the court action instituted to stop the congresses of APC in Imo State couldn’t sail through, it has become obvious they have lost out.
Moreso, Trumpeta learnt that the national body has sounded strong warnings to party members against taking their matters to civil courts. Okorocha and group may have to quit from court to seek other options.
This newspaper learnt that the emergence of the new LGA excos without the inputs of the former governor, Araraume and allies are strong indications that they have finally lost out from the power play of who gets control of Imo APC structure.
The three federal lawmakers said to be Okorocha’s loyalists are also reported not to have participated in the congresses thereby leaving them out without a structure to hold on in the party.

Uzodinma: Expose Me If I Steal Imo State Govt Money Says No Salary Hope For Over 10,000 Suspected Ghost Workers