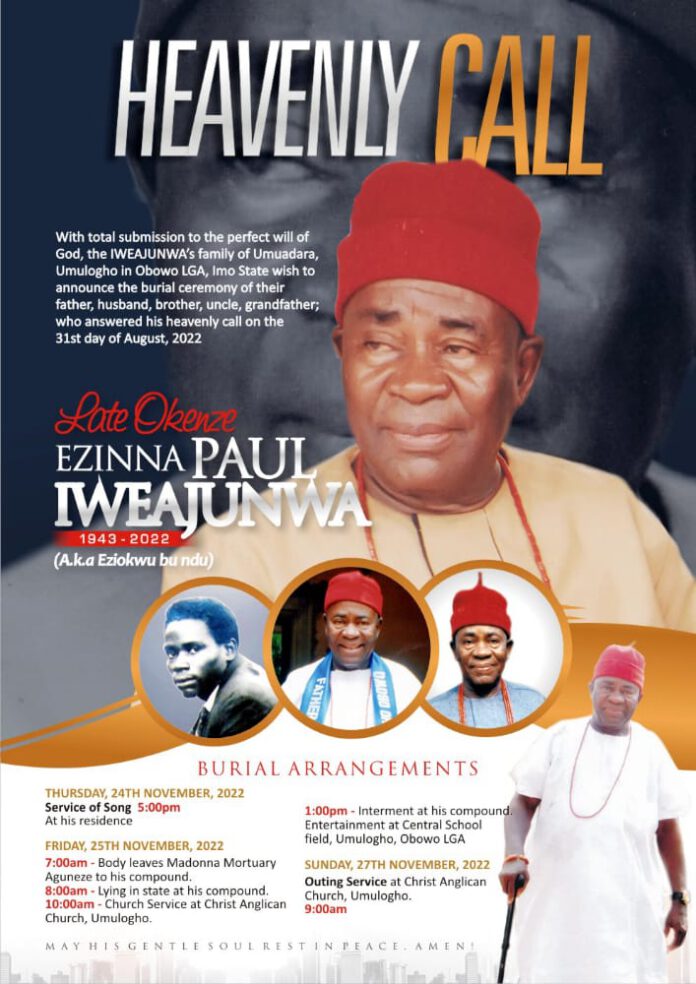 The members of the Sports Writers Association of Nigeria SWAN, Imo State Chapter has condoled with their member, Mr Ilechukwu Iwuajuanwa of the News Agency of Nigeria NAN, over the death of his father, Late Okeh Nze Paul Iweajuanwa.

According to a release from the family, his remains will be laid to rest on Friday November 25, 2022 at his home time.
While consoling the family of Iwuajuanwa, SWAN urged them to try and maintain his good legacy that made him to be known for not only being bold with unbelievable temerity, but also very truthful & straightforward. No wonder the late King of Old Okenalogho autonomous Community, Igwe Thompson (Atakaburo) conferred on him the title,  NZE EZIOKWU BU NDU 1 OF OKENALOGHO OBOWO (Truth is Life)

As if that was not enough, the current Chairman of Ndi Eze in Obowo, Nlogho II of Umulogho autonomous Community, H.R.M Eze Ngozi Patrick Uwalaka, some years ago, conferred on him same title, as, Okeh Nze Eziokwu bu Ndu 1 of Umulogho.
Till his death, he was one of the oldest title holders in Umulogho Obowo. One of he most fearful, yet he was naturally fearless. He brought a lot of changes and made a lot of contributions in the current cabinet of Nlogho II of Umulogho, in Umulogho Community and beyond.
Though a dedicated Christian, recognized Christian father of the revered Anglican Church, but he was never found wanting in the maintenance of appropriate culture and tradition of his people. He has been a committee chairman of annual mbomuzo Umulogho, for several years, participated actively in making sure that mwamakwa Umulogho (iwa-akwa) l was done accordingly, accurately and appropriately.
Okeh Nze Paul Iweajuanwa, Eziokwu bu Ndu 1 of Okenalogho Obowo & Umulogho autonomous Community, was a confirmed custodian of culture before his death, he was also an encyclopedia of traditional history & cultural heritage.