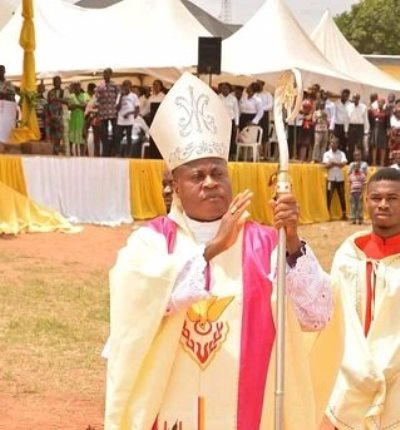 By Onyekachi Eze
The scriptural aphorism which posits that “the rejected stone has become the chief corner stone” could be the best description in the life of Bishop Peter Ebele Okpaleke.
The dream of every Roman Catholic priest in ascending to the work of Christ, rather than descending has manifested in the life of Peter Okpaleke, following his appointment as the pioneer Bishop of the newly created Ekwulobia Diocese, in Anambra State.
It would be recalled that following the death of the then Bishop of Ahiara Diocese, Bishop Victor Chikwe in 2012, the Vatican consecrated and appointed Okpaleke in 2012 to oversee the missionary work of the Mbaise diocese.
However, since 2012 he (Okpaleke) was sent to Ahiara, Mbaise faithful vehemently said “no” to his reign, which was trailed by plethora of protests and petitions to the Vatican.
The said rejection, according to information gathered was not unconnected to the origin of birth of Okpaleke who hails from Anambra State.
While Mbaise clan were making case for one of their sons in priesthood or at worst from Owerri Archdiocese to replace the late Chikwe, all effort by other dioceses proved abortive.
In the early stage of the lenten season in 2018, Bishop Peter Okpaleke tendered his resignation and as a means to rest the imbroglio rocking the church of God.
In acceptance, Pope Francis, the hierarchy of the Catholic faith therefore appointed the Bishop of Umuahia Diocese, Bishop Lucius Ugorji as the apostolic administrator of Ahiara Diocese, who is working in that capacity till date.
Meanwhile, as luck would smile on the face of the once embattled bishop, Pope Francis appointed Bishop Okpaleke as the first bishop incharge of the newly established Diocese of Ekwulobia which took effect from yesterday.
An overview from the people of the Anambra diocese apparently signals that the emergence of Okpaleke was accepted by the Catholic community in good faith, having being a son of the land, and served the church in different categories.