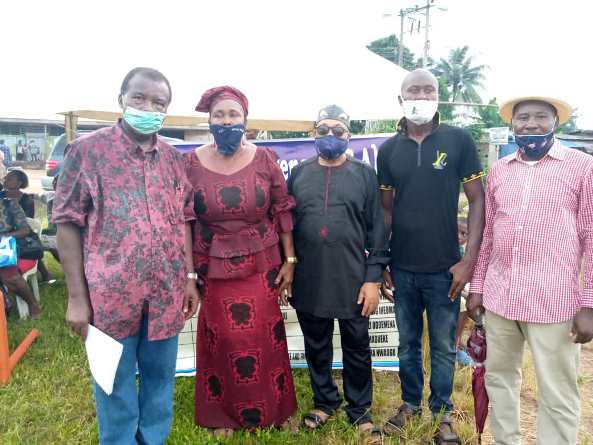 Following the outbreak of the novel global virus known as Covid-19, which has caused untold hardship and hunger in the country, some illustrious sons and daughters of Okpala Autonomous Community in America (USA) have donated palliative materials to indigenes of the seven villages making up the community to cushion the effect of the COVID-19 disease.
The items include bags of rice, bags of beans, bags of onions , bags of crayfish, Tons of tomatoes and customized face masks which amounts to a whopping a sum of #4.4 Million naira.
Presenting the relief items at Okpala Central School, the committee chairman Dr Alex Okereke appreciated greatly the efforts of their sons and daughters who came up with such wonderful initiative.
He described the initiative as humanitarian effort to contain the ravaging hunger and alleviate the sufferings occasioned by the dreaded Covid 19 scourge.
Dr. Okereke who was full of praises for the donors said it was worthy of note that the vision came up as a joint effort of their daughters before involving their sons.
He enjoined the community to pray for all those who made it possible, adding that the sharing formula would be done based on numerical strength of the different villages.
According to Okereke” we want progress, peace and unity in our land. I give credit to our girls because what we have today is the result of their efforts”
Also speaking Chief Obinna Eziakonwa, Coordinator of the covid-19 food aid and a successful business mogul said aim of the initiative was to put smile on the faces of their people.
Chief Eziakonwa who was one of those who made the occasion successful said that the gesture was informed by the excruciating hardship on the people especially, the under privileged in the populace.
Chief Eziakonwa was full of praises for the donors, even as he expressed excitement that the relief items were evenly distributed and all villages received it in good fate.
He called on his people to strictly adhere to words of experts and official instructions from health agencies as well as practicing adequate preventive measures already prescribed by them.
Acknowledging the receipt of the items on behalf the people, MKO Opara, one the facilitators of the program thanked the donors for their generosity and care for their own people .
MKO who also SA Media to Hon Tochi Oparaeke assured that their people would put it in good use for the targeted beneficiaries just as directed by Okpala Autonomous Community (USA).
He seized the platform to call on other illustrious sons and daughters of the community to emulate the gesture by putting smiles on their people’s faces.