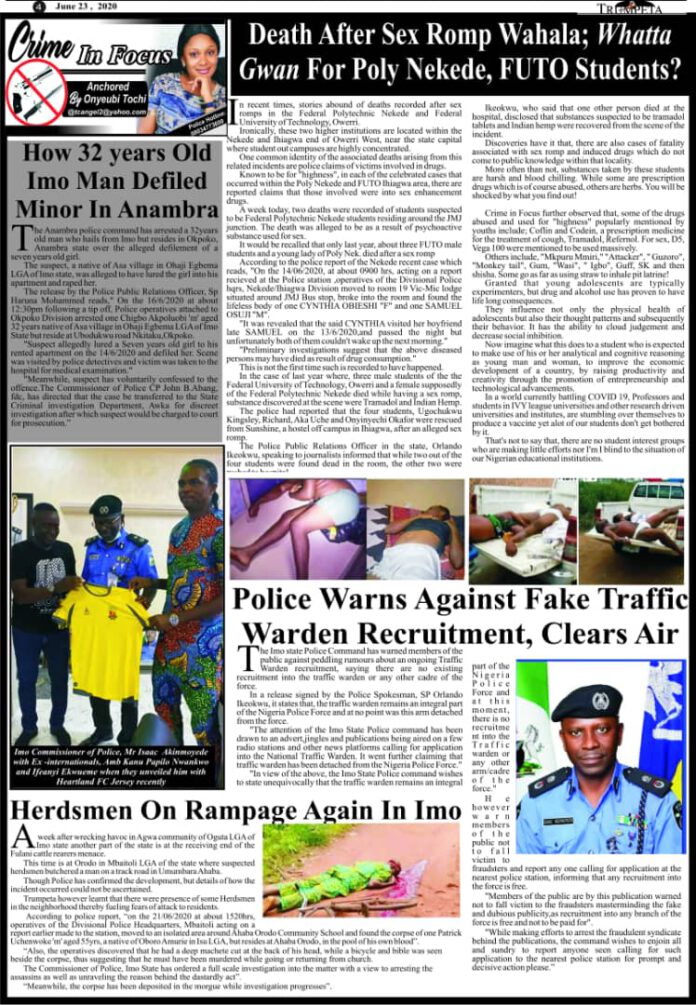 In recent times, stories abound of deaths recorded after sex romps in the Federal Polytechnic Nekede and Federal University of Technology, Owerri.

Ironically, these two higher institutions are located within the Nekede and Ihiagwa end of Owerri West, near the state capital where student out campuses are highly concentrated.

One common identity of the associated deaths arising from this related incidents are police claims of victims involved in drugs.

Known to be for “highness”, in each of the celebrated cases that occured within the Poly Nekede and FUTO Ihiagwa area, there are reported claims that those involved were into sex enhancement drugs.

A week today, two deaths were recorded of students suspected to be Federal Polytechnic Nekede students residing around the JMJ junction. The death was alleged to be as a result of psychoactive substance used for sex.

It would be recalled that only last year, about three FUTO male students and a young lady of Poly Nek. died after a sex romp

According to the police report of the Nekede recent case which reads, “On the 14/06/2020, at about 0900 hrs, acting on a report recieved at the Police station ,operatives of the Divisional Police hqrs, Nekede/Ihiagwa Division moved to room 19 Vic-Mic lodge situated around JMJ Bus stop, broke into the room and found the lifeless body of one CYNTHIA OBIESHI “F” and one SAMUEL OSUJI “M”.

“It was revealed that the said CYNTHIA visited her boyfriend late SAMUEL on the 13/6/2020,and passed the night but unfortunately both of them couldn’t wake up the next morning.”

“Preliminary investigations suggest that the above diseased persons may have died as result of drug consumption.”

This is not the first time such is recorded to have happened.

In the case of last year where, three male students of the the Federal University of Technology, Owerri and a female supposedly of the Federal Polytechnic Nekede died while having a sex romp, substance discovered at the scene were Tramadol and Indian Hemp.

The police had reported that the four students, Ugochukwu Kingsley, Richard, Aka Uche and Onyinyechi Okafor were rescued from Sunshine, a hostel off campus in Ihiagwa, after an alleged sex romp.

The Police Public Relations Officer in the state, Orlando Ikeokwu, speaking to journalists informed that while two out of the four students were found dead in the room, the other two were rushed to hospital.

Ikeokwu, who said that one other person died at the hospital, disclosed that substances suspected to be tramadol tablets and Indian hemp were recovered from the scene of the incident.

Discoveries have it that, there are also cases of fatality associated with sex romp and induced drugs which do not come to public knowledge within that locality.

More often than not, substances taken by these students are harsh and blood chilling. While some are prescription drugs which is of course abused, others are herbs. You will be shocked by what you find out!

Crime in Focus further observed that, some of the drugs abused and used for “highness” popularly mentioned by youths include; Coflin and Codein, a prescription medicine for the treatment of cough, Tramadol, Refernol. For sex, D5, Vega 100 were mentioned to be used massively.

Granted that young adolescents are typically experimenters, but drug and alcohol use has proven to have life long consequences.

They influence not only the physical health of adolescents but also their thought patterns and subsequently their behavior. It has the ability to cloud judgement and decrease social inhibition.

Now imagine what this does to a student who is expected to make use of his or her analytical and cognitive reasoning as young man and woman, to improve the economic development of a country, by raising productivity and creativity through the promotion of entrepreneurship and technological advancements.

In a world currently battling COVID 19, Professors and students in IVY league universities and other research driven universities and institutes, are stumbling over themselves to produce a vaccine yet alot of our students don’t get bothered by it.

Thats not to say that, there are no student interest groups who are making little efforts nor I’m I blind to the situation of our Nigerian educational institutions.

The Anambra police command has arrested a 32years old man who hails from Imo but resides in Okpoko, Anambra state over the alleged defilement of a seven years old girl.

The suspect, a native of Asa village in Ohaji Egbema LGA of Imo state, was alleged to have lured the girl into his apartment and raped her.

The release by the Police Public Relations Officer, Sp Haruna Mohammed reads,” On the 16/6/2020 at about 12:30pm following a tip off, Police operatives attached to Okpoko Division arrested one Chigbo Akpoluobi ‘m’ aged 32 years native of Asa village in Ohaji Egbema LGA of Imo State but reside at Ubodukwu road Nkitaku,Okpoko.

“Suspect allegedly lured a Seven years old girl to his rented apartment on the 14/6/2020 and defiled her.Scene was visited by police detectives and victim was taken to the hospital for medical examination.”

“Meanwhile,suspect has voluntarily confessed to the offence.The Commissioner of Police CP John B.Abang,fdc, has directed that the case be transferred to the State Criminal investigation Department,Awka for discreet investigation after which suspect would be charged to court for prosecution.”

The Imo state Police Command has warned members of the public against peddling rumours about an ongoing Traffic Warden recruitment, saying there are no existing recruitment into the traffic warden or any other cadre of the force.

In a release signed by the Police Spokesman, SP Orlando Ikeokwu, it states that, the traffic warden remains an integral part of the Nigeria Police Force and at no point was this arm detached from the force.

“The attention of the Imo State Police command has been drawn to an advert,jingles and publications being aired on a few radio stations and other news platforms calling for application into the National Traffic Warden. It went further claiming that traffic warden has been dethatched from the Nigeria Police Force.”

“In view of the above, the Imo State Police command wishes to state unequivocally that the traffic warden remains an integral part of the Nigeria Police Force and at this moment, there is no recruitment into the Traffic warden or any other arm/cadre of the force.”

He however warn members of the public not to fall victim to fraudsters and report any one calling for application at the nearest police station, iforming that any recruitment into the force is free.

“Members of the public are by this publication warned not to fall victim to the fraudsters masterminding the fake and dubious publicity,as recruitment into any branch of the force is free and not to be paid for”.

“While making efforts to arrest the fraudulent syndicate behind the publications, the command wishes to enjoin all and sundry to report anyone seen calling for such application to the nearest police station for prompt and decisive action please.”

Herdsmen On Rampage Again In Imo

A week after wrecking havoc in Agwa community of Oguta LGA of Imo state another part of the state is at the receiving end of the Fulani cattle rearers menace.

Though Police has confirmed the development, but details of how the incident occured could not be ascertained.

Trumpeta however learnt that there were presence of some Herdsem in the neighborhood thereby fueling fears of attack to residents.

According to police report, “On the 21/06/2020 at about 1520hrs, operatives of the Divisional Headquarters, Mbaitoli acting on a report earlier made to the station, moved to an isolated area around Ahaba Orodo community school and found the corpse of one Patrick Uchenwoke ” m” aged 55yrs, a native of Oboro Amurie in Isu LGA, but resides at Ahaba Orodo in the pool of his own blood”.

“Also, the operatives discovered that he had a deep matchete cut at the back of head, while a bicycle and bible was seen beside the corpse, thus suggesting that he must have been murdered while going to or returning from church.

The Commissioner of Police, Imo state jas ordered a full scale investigation into the matter with a view to arresting the assassin as well as unraveling the reason behind the dastardly act”.

” Meanwhile, the corpse has been deposited in the morgue while investigation progresses”.