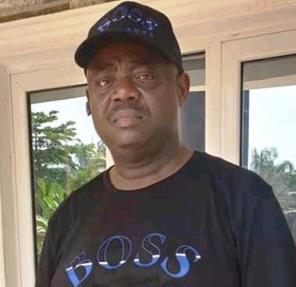 It seems that the last is yet to been seen or heard from a Lagos based, Imo State born real estate and security expert, Prince Nixon Okwara of Onix group, on his latest  theory on improved security through human development; as he has concludes every arrangements on flying some of the outstanding players of his team to Europe for trials.
This wonderful development was disclosed to Trumpeta Sports desk by one of the prospective beneficiaries, Okpara Chigozie Daniel who starred for O’nix Football Club that represented Lagos branch at the last Christmas Soccer Fiesta organized by the Isiekenesi Progressives Assembly, IPA, for indigenes of Isiekenesi autonomous community in Ideato South of Imo State.
According to the gangling striker, the scouts from Springsoca football club Lagos who came at the instance of Prince Nixon invited three players of O’nix FC for trials at their Lagos camp, after which him (Chigozie) and one other player scaled the trial, the young lad thanked everyone; the organizer, IPA, the sponsor, Victor Nwanaforo-Onyechere and above all the financier of O’nix Football Club, Prince Nixon Okwara for such life transforming opportunity and pleaded that the competition should be sustained.
Remarkably, when the founder and financier of O’nix FC, Prince Nixon Okwara was contacted, he confirmed the development and went further to revealed that in conjunction with the National Senior Female football team Coach of Finland, Mr Victor Uzoho, who is also an Indigenes of Isiekenesi and a member of IPA; O’nix Group has concluded every arrangements to send the lucky players to Europe for trials.
Speaking further, the security expert said that the gesture has no political undertone of any type, but a human capital development and security strategies, to empower and keep young and talented youth our of crime by engaging them on skills especially the one of their choice.
It will be recalled that in preparation to the soccer fiesta, Prince Nixon spent freely on the Team-Lagos during their three months training, lodged them in a hotel enroute home for the competition with chartered buses thro and fro Lagos, lodged them in his country home throughout the duration of the Fiesta. Consequently, irrespective of all his financial commitments he left the third place cash prize won by the team for it to be sheared among the players and team officials.