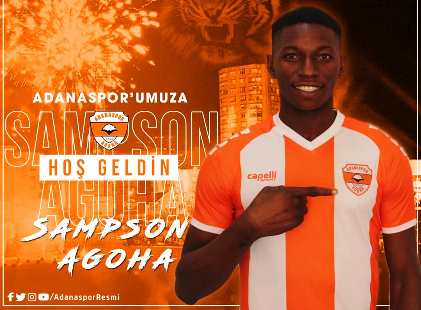 Campos FC Academy teenage striker, Sampson Agoha has penned down a Two year professional deal with Turkish league side, Adanaspor’ Umuza FC Trumpeta Sports Desk gathers.
A statement from the social media handle of the Turkish Super League side suggests that the Irete in Owerri West LGA born lanky striker has joined them for 2 years and may soon begin to feature for them once every other paper work is sorted out.
Revealing the news to Trumpeta sports desk, President of Campos FC, Osuji Patrick Ikechukwu “Campos” expressed satisfaction with the break through noting that although his Nation -Wide League side would miss his services when the league commences but was happy for the young lad’s exploits and wished him success in his professional career in Europe.
Mr Patrick who failed to reveal details of the deal said the OND graduate of Federal Polytechnic Nekede, Owerri has what it takes to succeed in Europe stressing that his fighting sprit and physical strength will be an added advantage.
He however used the medium to call on talented young stars who are looking for an opportunity to progress their career to join his ongoing screening exercise at the Old Township Stadium, Owerri and be selected into his team,  Campos FC who according to him will be taking part in this seasons Nation -Wide league, the nations 3rd tier league.