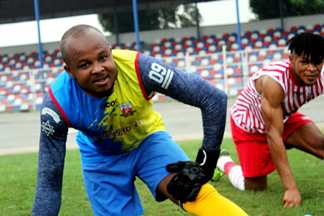 Super Eagles and Heartland FC Keeper, Ikechukwu Ezenwa has expressed optimism of his club beating Ifeanyi Ubah FC tomorrow in one of the NPFL match day 7 fixtures at the Dan Anyiam Stadium, Owerri.
Ezenwa who made this declaration in a chart with Heartland media said when the two side lock horns tomorrow that his friendship with his former side will be pit aside as he and his lads would be all out for the 3 points which he pointed out will aid their moving out of the relegation zone on the log.
“Ifeanyi Ubah FC is one team that in one way helped me before I left for Enyimba Int’l and then to Katsina United FC before my coming to Heartland FC but this is business and one thing about business, its all about being focused and getting it right, we have to win them  because it would help our position on the log.
The former Enyimba goaltender who has also played for Ifeanyi Ubah and Katsina United also said he and his team mates are not under pressure over the goals they have been conceding.
“No am not under pressure of not having a clean sheet in our matches so far because that’s how the game of football is but am sure we can get it better because I know we have very good defenders and we have been playing well too,its just a matter of time for us to start getting things right and move up the ladder”, Ezenwa pointed out.