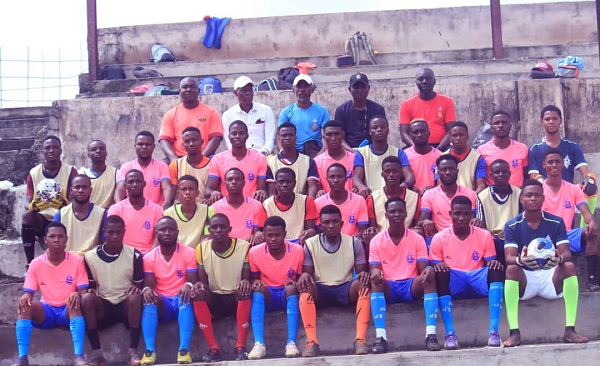 The newest football club bride in town, Firstmahi Football Club of Owerri yesterday named members of its management crew that will take care of day-to-day running of the Owerri based.
Smarting from a two weeks screening exercise, the young and fast rising team that just resumed training exercise last week doled out names of the management team in readiness for the new season.
According to a release made available by the Firstmahi media, the management which comprises experienced ex-internationals and seasons football administrators include; Mr Chuks Dike (Vice Chairman), Mr Tony Egbule (Sporting Director), Mr  Uche Anyanwu (Team Manager), Rev Fr Chika Opara (Welfare Officer), Mr Okorie Ifeanyi “Small Boy” (Chief Security Officer) and Mr Orji Sampson (Secretary/Media).
The vice chairman, Chuks Dike  who spoke to Trumpeta sports desk on behalf of others shortly after the clubs Director, Prince Chidiebere Onuoha made available the management list expressed their total commitment and promised to bring all global professional practice to ensure that the team realises its dream to the admiration of the parent International body in United Arab Emirates UAE.
He however noted that the team after a shirt break resumed last week and is still on the look out for talents that will in the near future become super stars.
He reiterated the clubs desire to play in Nation Wide League NWL, this new season as well as the Aiteo Cup but that the team will in no distant time embark on series of friendlies to put the players in shape ahead the new season