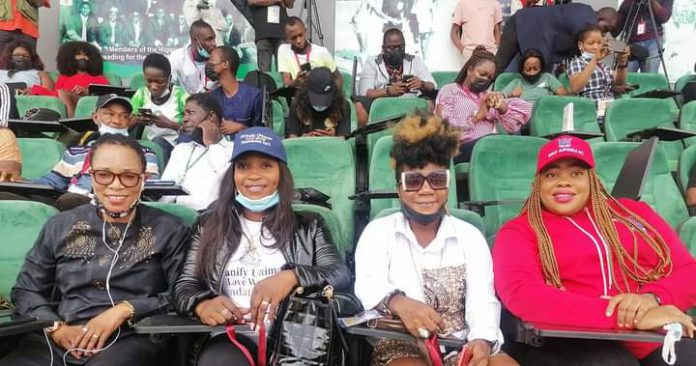 Imo Angels FC CEO, Lady Jenny Anusiem has joined Nigerian women football stakeholders in commending Super Falcons on their win over Mali in the maiden Aisha Buhari CAF Women Invitational tournament.
The youngest football CEO who was in Lagos to see the encounter also used the medium to to laud the brave performance of  FC Robo striker, Monday Gift who gifted Nigeria two goals when she rose from the bench to win the game for the 6 time African Champions.

Anusiem said the performance of Monday has further confirmed to Nigerians that the women’s football revolution witnessed at the NWFL Premiership Super Six in Ijebu Ode, was no fluke, as Monday Gift, two times Highest Goal Scorer and Most Valuable Player of the NWFL Premiership, scored the two goals against Mali that put smiles on the faces of Nigerians.
She therefore advised the young players to continue developing their games by being consistent and disciplined with their training and life style.
“My advice to young players is to keep developing yourself, keep training, be focused, be available to showcase your skill, you dont know the opportunity that is coming your way.
“Gift Monday from a local based side came from the bench in from of the FIFA President, Lagos State Governor and top Nigeria football administrators and seized the opportunity to announce herself by giving Nigeria the victory”, excited Anusiem stated.
The passionate advocate for the empowerment of the ” girl child” however regretted that her good friend and Dijon FC of France striker, Desire Oparanozie sustained an injury in the game after her brilliant performance as she wished a quick recovery for the Amazon she said has been a role model for her players in Imo Angels FC.
The Obowo In Imo state born entrepreneur who delights in helping young talented girls realise their dream also commended organizers of the Aisha Buhari cup reiterating that it will help boost the already reveling female league in Nigeria thanking the Presidents Wife, Her Excellency, Aisha Buhari for accepting to identify with the all important project