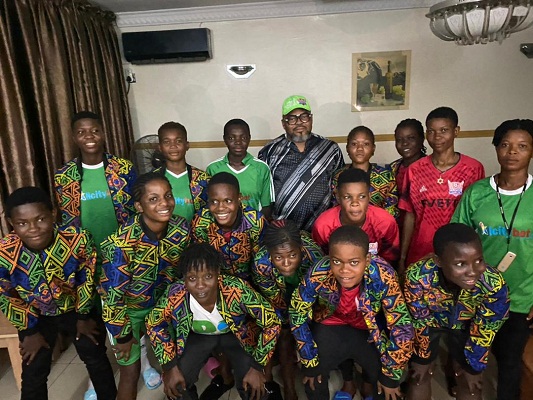 The PDP candidate during last years bye election for Okigwe Senatorial Zone made the suprise visit on the “Jenny Babes” in company of his brother, Kelechi with his business colleague and friend charging them not to relent in their efforts to make good use of their God’s given talent.

The Avutu in Obowo LGA born philanthropist lauded the club’s CEO, Lady Jenny Anusiem for her vision and determination to provide such a wonderful platform for  the girl child to become useful citizens.

“I must commend my sister for coming this far with such a Wonderful project to put Imo on the spot light.

“She needs support cause she is giving opportunity to the talented less privileged ones”, he stated.

Ikeoha supported the CEO in sustaining the team with with a mouth watering sum of  for the players welfare and transport.

He however promised to continue empowering the youths through sports in Okigwe Zone as he would soon commence his “Chief Emma Okewulonu Female Football Tournament”, with the view of discovering and exposing talented female footballers in the zone.

In his own contribution, his brother Kelechi who collaborated words of Ikeoha in supporting their sister’s project of empowering the girl child also made a donation to the team.

Reacting, the clubs CEO/Chairman, Lady Jenny Anusiem thanked his Uncle, ‘Ikeoha Okigwe’ and his  brother, Kelechi appreciating them for finding time to visit the players even with the short notice.

While explaining the teams brief but rich history, she narrated their mission in Lagos to take part in the maiden RedBull Neymar Jr Five aside football challenge at Upbeat Fitness Sports Centre, Lekki Phase 1, where they finished 5th on the log after narrowly losing in the quarter final.

Captain of the team, Okpe Chizoba who appreciated Ikeoha for his benevolence on behalf of her colleagues outlined major needs of the club including a camp, bus and their stipends pleading for more support from Chief Okewulonu and his brothers.