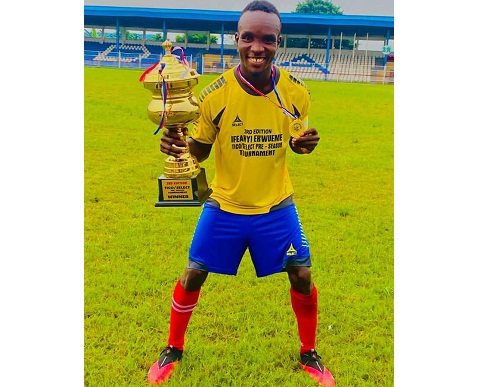 Heartland FC, Owerri on Sunday defeated Abia Warriors FC, Umuahia for the first time in a competitive contest 1 – 0 to lift the 3rd edition of the Ifeanyi Ekwueme TICO/SELECT Pre Season tournament.
A ninth minute strike by Ikenna Stephen was all the Naze Millionaires needed to edge their Oriental rivals in a keenly contested final at the Dan Anyiam stadium, Owerri.
Both side displayed on the day to their various fans and owners what to expect when the 2021/22 NPFL season finally kicks off on December 17, 2021 as stated by organizers of the league, the League Management Company, LMC.
Hassan Abdallah, the new Technical Adviser of Heartland FC expressed joy after winning his first trophy in first time of handling an NPFL side.
He however expressed that they are some areas in his team to strengthen upon adding that his boys will be ready for the league in two weeks time.
“Am delighted with the players effort but we alao have some areas in the team to get right and all I need is to make the players understand the importance and basics of those positions during play.
“Am quite open to receive the old players who couldn’t take part in the pre season back in fold and am looking forward to work with every one and get the the team in the right shape for the league, elated Abdallah said.
Excited Imo sports Commissioner, Hon Dan Chike Ogu and the sole sponsor of the tournament, Ifeanyi Ekwueme was joined by Abia Warriors FC Chairman, Pastor Emeka Inyama during the decoration of the runners up individual award winners, the champions before handing the trophy to Heartland FC captain on the day, Nwordu Chukwudi to joy of the Naze Millionaires who savoured the moment as they did when the club won their last trophy in 2012.
Nwobodo Chidiebere of Rangers Int’l (Last seasons champion) won the top scorers award with 7goals while midfield maestro, Emota Cletus of Abia Warriors won the Most Valued Players (Best Player) award.
Ifeanyi Ekwueme TICO/SELECT Pre season tournament is powered by ex international, Ifeanyi Ekwueme (TICO/SELECT Brand Africa representative) and used to help the NPFL side to prep their teams ahead of the new season.
This seasons tournament was hosted in two venues Enugu and Owerri with Rangers, Lamray UTD, Ingas FC, Cynosure FC and All Active Stars at the Enugu center while Owerri housed Heartland FC, Rivers United, Abia Warriors, Firstmahi FC and Apex Krane FC.
Rangers and Lamray made to the semis from Enugu while Heartland and Abia Warriors qualified from Owerri.
In the semis whixh was all played in Owerri, Heartland FC beat Lamray United 3-2 while Abia Warriors with one man down piped Rangers 5-4 on penalties after the regulation time ended 1-1.