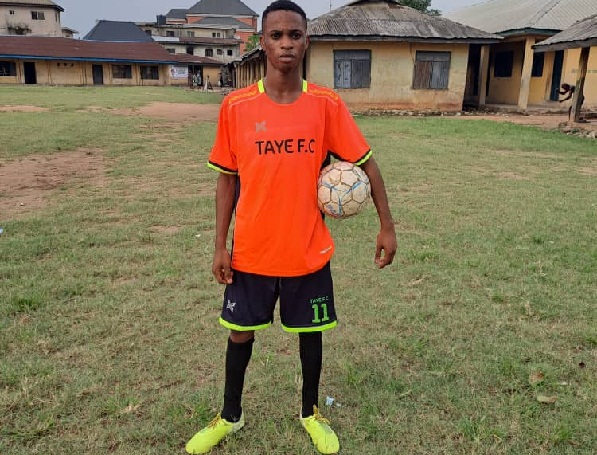 ..As Taye Academy u-15 Humbles Legit FC In Opener

A couple of years after the emergence of Kelechi Iheanacho “Snr Man Kel”, another football prodigy is about to be unveiled again from Taye Football Academy.

This is following the goal poaching instinct of the Umuayo in Eziobodo of Owerri West LGA born Nwachukwu Sorochi who is currently painting the ongoing Imo state U-15 Memorial Football Championship with goals.

Sorochi who in a chart with Trumpeta sports desk revealed his administration for Didier Drogba’s style play in their first game against Legit FC Academy banged a hart trick to hand his side a 5 – 0 victory.

“Although my role model in football is Drogba especially when he played for Chelsea, i want to make in the game as Kelechi Iheanacho who set the ball rolling for us.

” Snr man Kel is our inspiration, all the players in Taye Academy look up to all he has done from the U-15 to U-17 and at the Super Eagles and that’s why my ambition is to represent Nigeria starting wit the U-15 if given the chance.

Reacting on the blistering striker who loves bulling players with the ball like Drogba, Coach Taye …..who is also the owner of Taye Academy noted that Sorochi has the potential of becoming the next big thing in football after Iheanacho.

“I really dont like praising players but Sorochi possess some qualities that are rare which you can never resist from praising.

“I hope he can keep his head down like Kelechi Iheanacho did while still in Nigeria, he will also make and the Academy is also hoping to win the U-15 Memorial football tourney in memory of Late Shedrack Ajero, Monday Ibekwe and Sir Peter Erege who toiled in their days to develop grassroots football.