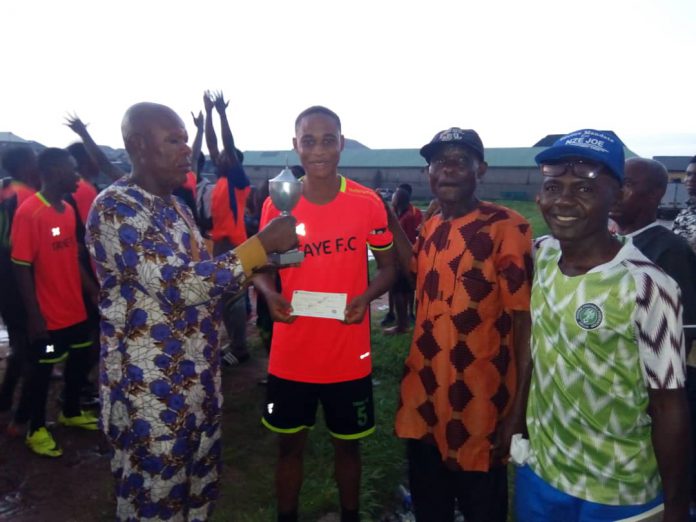 Power Strikers FC Academy of Alaenyi Ogwa 2-0 in the final.

Goals from Chidera Sato Hitomu Nwaeze in the 27th minute and Daniel Nwosu in the 65th minute were enough to tame hard fighting Power Strikers and deny them opportunity to lift the diadem.

The competition which started couple of months ago with 11 teams finally came to its crescendo on Sunday June 19, 2022 at the Old Township Stadium, Owerri.

The final which was designed to honour three fallen heroes of YSFON/Nigerian Senior national team, Shedrack Ajero, Sir Peter Erege and Monday Ibekwe all late had some very important dignitaries and club proprietors in the state such as Chairman of Malick FC Mr Malachy Atufule “Nkwachukwu Kwere Ogwa”, Vice President of FirstMahi FC, Prince Chidiebere Eze Onuoha (who supported YSFON with N10,000 cash prize for the winner), Mr Kelechi Eke, sponsor of the 2021/22 Owere Nshi-Ise  Unity cup and Mr Chuks Dike, Former General Manager of Imo Angels among many football scouts as well as parents of players of both teams who trooped out in their mass to cheer and support their wards.

Apart from the trophy and the cheque of N30,000 the winners, Taye FC Academy got, the team will later this year represent the state in the YSFON U-15 National Football Championship just as the runners up, Power Strikers FC Academy also get a cheque of N20,000.

Reacting after the final, Imo YSFON Secretary, Mr Tony Egbula told Trumpeta sports desk that soon the full list of the selected players including those from other teams will be published soon before the national tournament in Abuja.