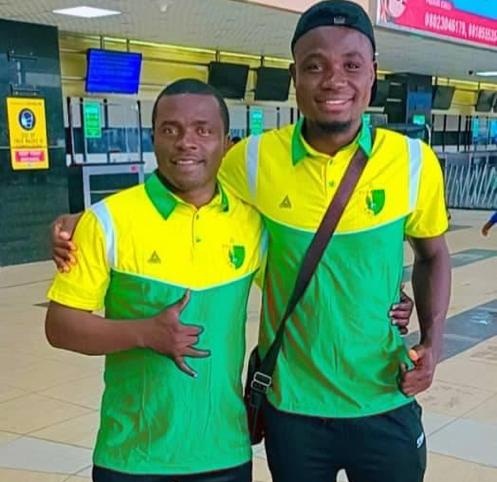 _..Thanks Coach Ilechukwu For Opportunity_

Former Mountain Of Fire & Miracle Ministries Football Club defender, Ifeanyi Onyebuchi Emmanuel has expressed his delight over his team’s 2-2 away draw against AS Stade Mandji Of Gabon in their first leg of the CAF Champions League first leg qualifying match last weekend.

Reacting ahead of the second leg tie which comes up this weekend at the MKO Abiola Int’l Stadium, Abuja the hard tackling defender who once had a professional stint with a Macedonian club some years back said he and his colleagues are very ready for the second leg assuring that they will do everything possible to secure a win this weekend and possibly make the group stage of this year’s CAF Champions League.

“We are happy with the away draw although a victory would have been perfect.

“We are ready to finish the work we started this weekend in Abuja to book a ticket for the next round and we are hungry for the group stage and possibly go as far as we can.

The Super Eagles hopeful said he is delighted to be playing under one of the best coaches in the country promising Plateau United of a better outing in the continent as he urged them to continue to support the team.

Plateau United have kicked off their CAF Champions League campaign with a 2-2 draw against Gabonese side, AS Stade Mandji.

The Peace Boys took the lead twice with Onyebuchi bagging the first at the 25th minute of play before both were pegged back by their opponent to settle for a 2-2 draw.

The draw means that Coach Fidelis Ilechukwu side maintained their unbeaten record on the continent in matches they scored the opener.

The second leg of the encounter is billed for Sunday, 18th December at the Moshood Abiola Stadium, Abuja.

The winner in two legs will face Tunisian side, Esperance du Tunis in the second preliminary round for a spot in the group stage.