Christian Emerum Emeka, an indigene Awo-mmama in Imo state is the youngest sensational striker in Europe at the moment. The young striker was born on the 11th of November 1994 had his early tutelage in the renowned Taye Football Academy based here in Owerri before exporting his dribbling and massacring skills to Europe in 2010.

Luck smiled on Daniel Amokach lookalike when after displaying his rear talent in Demark during a Dallas cup completion 2010 edition, an under 16 championship that that Taye Academy attended which saw Emerum win the championship with his team mate as well as the most valuable player award and the highest goal scorer award.

JFV Norden scouts didn’t waste time in snatching him up to their folds. As Clubs like Werder Bremen were daugling their cheque book for the signature of Emerum, German champions Bayern Munich with their connections snatched him from Norden and immediately, lunched him into their senior team plan. But for the presence of too many European stars, Bayern have loaned him out to a Tunisian club, Athletic Bizertin to give him more playing time and also to avoid the sort of tangle Chelsea and Man united had over Mikel Obi.

The 18 year old wonder kid who have been told to nationalize in Germany by the Bayern officials have had so many moral boosting companies in the Bayern senior team training with the likes of Frank Rebery, Arjen Robben, Schwanstinger, Muller, Kroos and Mario Gomez.

It must be recalled Nigeria have lost a lot of young players to European countries, and Emerum is in the breed of strikers that can lift our national under 20 team in the next edition. The authorities and John Ogbu most cease this opportunity to invite him now before the Germans take him into their under 20 team. 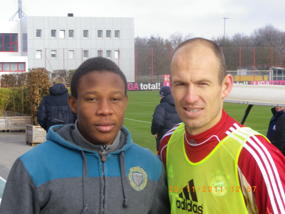