All is set for the annual Imo Youth Summit, 2018 edition and the Launching of Leadership Selection Criteria presented by the Imo Network Group ING, with the title, “The Man and the State”

In a press statement made available to Trumpeta which was signed by the ING board of Trustee chairman, Deacon Poly Chinenye Ezumoha (Samez), the event slated to take place on Saturday July 7, 2018 at the Sam Mbakwe Hall in Imo Concord Hotel, Owerri is aimed at energizing good democratic governance, credible and qualitative leadership in the state of Imo 2019 and beyond.

According to the release, the socio-political group while pointing out that they belong to no political party said the organizations emphasis are mainly on “credible and qualitative leadership” as they attempt to galvanize Imo people to embrace the collective ideals of having in government from 2019, credible and qualitative leaders that would be headed by proven technocrat that would move the state from the present lamentation to state of glory and laughter.

The group further lamented that lots of areas have been affected and that the economy of the state has nosedived southwards as the people are grumbling while the youths have been left with no sustainable jobs. They continued that the rural roads are in deplorable state with little or no good and affordable healthcare except lies and propaganda, mortuaries that have taken over as the number one thriving business in the state with our youths turning to impromptu undertakers while crime waves is on the high side.

While asking Imolites to turn out en mass for the epoch making event the group noted that the people are now faced with hunger, anger and frustration leading to insecurity and destruction of our community system.

They however called on the people to querry the unnecessary abuse of power and neglect to democratic process, including flagrant disobedience to court orders, impunity and abuse of rule of law.

Explaining why and how ING hopes to restore good governance, the group named the following steps as the means to actualize their vision for Imo State.

“We would search out for credible people from the State who are hitherto inhibited by the few powerful and their cronies from participating in our political processes, to come out and participate.

“We would search out for credible people from the State who are hitherto inhibited by the few powerful and their cronies from participating in our political processes, to come out and participate.

“We would engage all the candidates, in debates and would back- check their personalities and antecedents before presenting them to Imo people for further questioning.

“We’ve undertaken to check their past records, what they have for the people through their manifestos to see how it will impact the life of the common man.

“Above all, there must be a Social contract signed on behalf of Imolites by anyone that would govern the State from 2019 if there is going to be election in the State. This is one of the Cardinal obligations ING owe the people of the State to extract on their behalf. TNG has established presence in all the 27 Local Government Areas and Communities and are in contact with the grassroots. Our objective is to use the cells we are building reach out to the people wherever they are with the message of joining the Credible and Qualitative Leadership Project for the State from 2019. Our diaspora brothers and sisters are also in this project and have embraced this message of hope and project of liberation from 2019. We therefore passionately call on our brothers and sisters, progressive Imo Youths, residents and visitors to rally round ING in this difficult but worthy course.

“It’s worthy at this juncture to state that we are neither a partisan organization nor sponsored by any politician, political party or group of persons. We do not have allegiance to any either. Our mission is simply Credible & Qualitative Leadership 2019 and beyond.

“We are also aware of the amount of state money, our collective patrimony that is exchanging hands to buy the conscience of the people towards 2019. We wish to inform the people that these monies are ours, and if carelessly waved around you by any of these people, close your eyes to collect it but open your eyes to do what is right at the appropriate time. ING shall not forsake you. We shall continue to be your moral compass and shall navigate you whither to go. 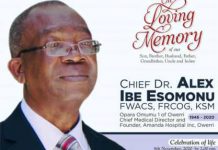