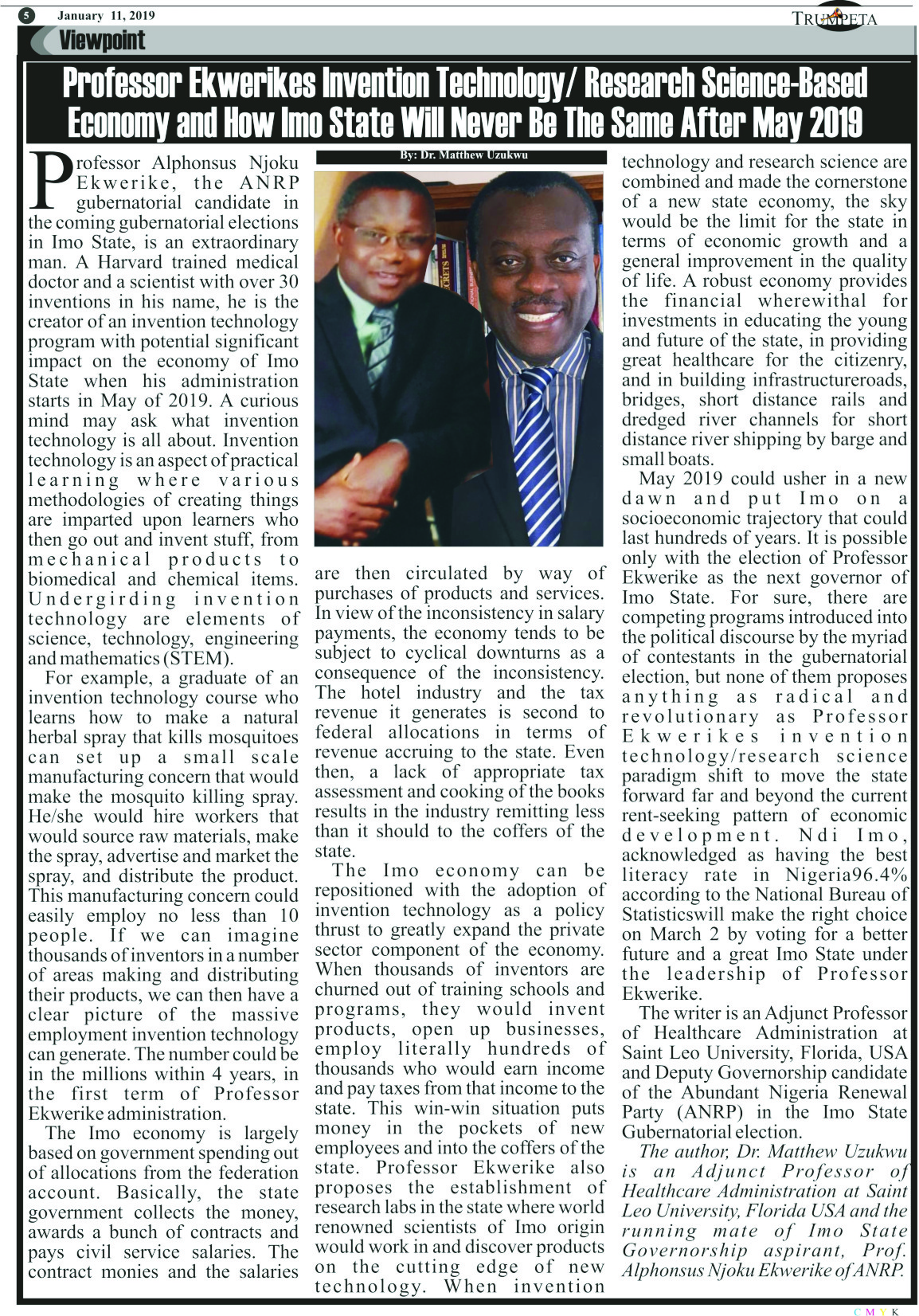 Professor Alphonsus Njoku Ekwerike, the ANRP gubernatorial candidate in the coming gubernatorial elections in Imo State, is an extraordinary man. A Harvard trained medical doctor and a scientist with over 30 inventions in his name, he is the creator of an invention technology program with potential significant impact on the economy of Imo State when his administration starts in May of 2019. A curious mind may ask what invention technology is all about. Invention technology is an aspect of practical learning where various methodologies of creating things are imparted upon learners who then go out and invent stuff, from mechanical products to biomedical and chemical items. Undergirding invention technology are elements of science, technology, engineering and mathematics (STEM).

For example, a graduate of an invention technology course who learns how to make a natural herbal spray that kills mosquitoes can set up a small scale manufacturing concern that would make the mosquito killing spray. He/she would hire workers that would source raw materials, make the spray, advertise and market the spray, and distribute the product. This manufacturing concern could easily employ no less than 10 people. If we can imagine thousands of inventors in a number of areas making and distributing their products, we can then have a clear picture of the massive employment invention technology can generate. The number could be in the millions within 4 years, in the first term of Professor Ekwerike administration.

The Imo economy is largely based on government spending out of allocations from the federation account. Basically, the state government collects the money, awards a bunch of contracts and pays civil service salaries. The contract monies and the salaries are then circulated by way of purchases of products and services. In view of the inconsistency in salary payments, the economy tends to be subject to cyclical downturns as a consequence of the inconsistency. The hotel industry and the tax revenue it generates is second to federal allocations in terms of revenue accruing to the state. Even then, a lack of appropriate tax assessment and cooking of the books results in the industry remitting less than it should to the coffers of the state.

The Imo economy can be repositioned with the adoption of invention technology as a policy thrust to greatly expand the private sector component of the economy. When thousands of inventors are churned out of training schools and programs, they would invent products, open up businesses, employ literally hundreds of thousands who would earn income and pay taxes from that income to the state. This win-win situation puts money in the pockets of new employees and into the coffers of the state. Professor Ekwerike also proposes the establishment of research labs in the state where world renowned scientists of Imo origin would work in and discover products on the cutting edge of new technology. When invention technology and research science are combined and made the cornerstone of a new state economy, the sky would be the limit for the state in terms of economic growth and a general improvement in the quality of life. A robust economy provides the financial wherewithal for investments in educating the young and future of the state, in providing great healthcare for the citizenry, and in building infrastructureroads, bridges, short distance rails and dredged river channels for short distance river shipping by barge and small boats.

May 2019 could usher in a new dawn and put Imo on a socioeconomic trajectory that could last hundreds of years. It is possible only with the election of Professor Ekwerike as the next governor of Imo State. For sure, there are competing programs introduced into the political discourse by the myriad of contestants in the gubernatorial election, but none of them proposes anything as radical and revolutionary as Professor Ekwerikes invention technology/research science paradigm shift to move the state forward far and beyond the current rent-seeking pattern of economic development. Ndi Imo, acknowledged as having the best literacy rate in Nigeria96.4% according to the National Bureau of Statisticswill make the right choice on March 2 by voting for a better future and a great Imo State under the leadership of Professor Ekwerike.

The writer is an Adjunct Professor of Healthcare Administration at Saint Leo University, Florida, USA and Deputy Governorship candidate of the Abundant Nigeria Renewal Party (ANRP) in the Imo State Gubernatorial election.