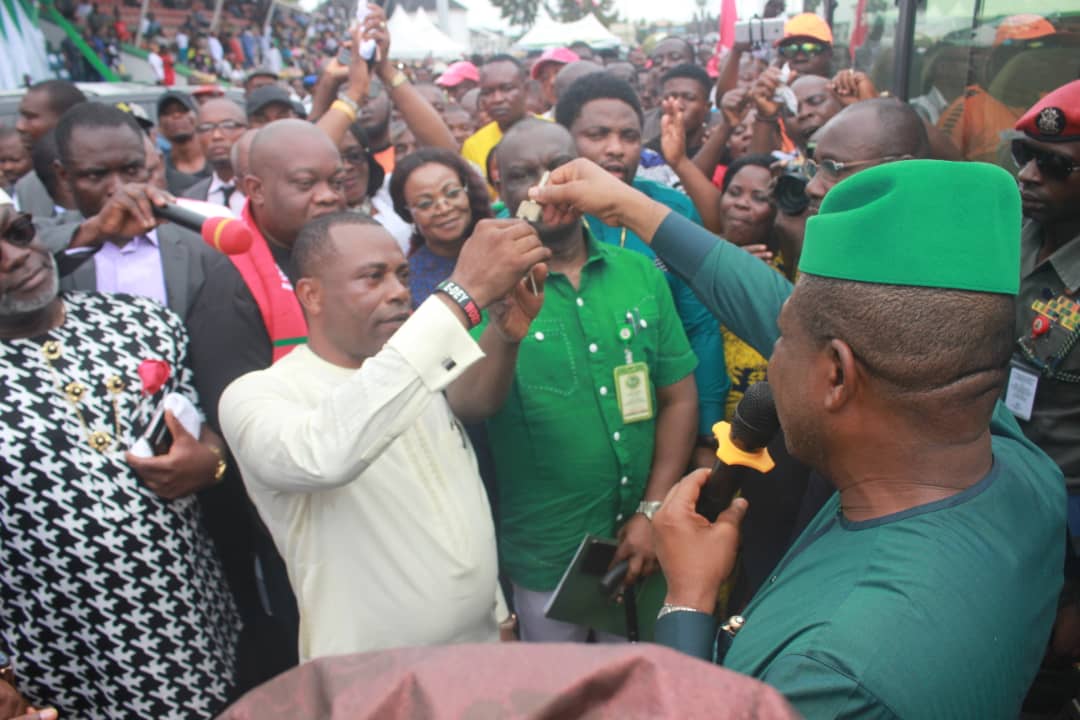 The Board Chairman of Heartland Football Club of Owerri, Chief Barr Charles “Babatunde” Ezekwem has expressed his gratitude and appreciation to the Governor of Imo State over brand new 32 Coaster Bus presented to the Naze Millionaires.

Handing over the keys of the Bus to Barr Ezekwem at the Independence day celebration held at the Cenatope Owerri, popularly known as Heroes Square on Tuesday, Governor Ihedioha commended the vigour and passion with which the Board has carried out her activities, promising that his government is determined to bring about tangible realities as well as a paradigm shift in the administration of sports and the State at large.
He recalled with nostalgia how Heartland was saved from capitulating to the depth of relegation before he came into office and the deliberate steps of the Barr Ezekwem led board in reforming the Club, with the acquisition of a sound tactician (Fidelis Ilechukwu) as well as some marquee signings including a Super Eagles goalkeeper, Ikechukwu Ezenwa among others to prosecute the new season.

Reacting on the gesture, Barr Ezekwem who was visibly filled with joy declared Ihedioha’s gift as a “perfect independence gift,” stressing that Ihedioha has once again matched his words with action as his name “Omenkahuruanya” signifies.

The erudite lawyer who is also the Imo State Chairman of the Peoples Democratic Party PDP, promised to reciprocate the confidence reposed in him by the number one citizen of the State by working hard with the team to restore the glory days of the Club with a continental ticket as a commensurate gift to the Sport loving governor.

Others present at the hand over ceremony were the members of the Heartland board such as Henry Nwosu (MON) Coach David Adiele (MON) Emeka Asor,(Board Secretary) Godson Onyemaobi, Levi Njoku ,Chief Allwell Nwakali, Chief Chukwudi Ifeanyi (General Manager), Chief Fan Ndubuoke (Chairman IMO State Sports Commission) the management team and the Supporters club who were in cloud nine, singing and dancing.
Meanwhile the Nigerian Professional Football league is billed to commence on the 20th of October hence the provision of a brand new Toyota coaster bus couldn’t have come at a better time than now.