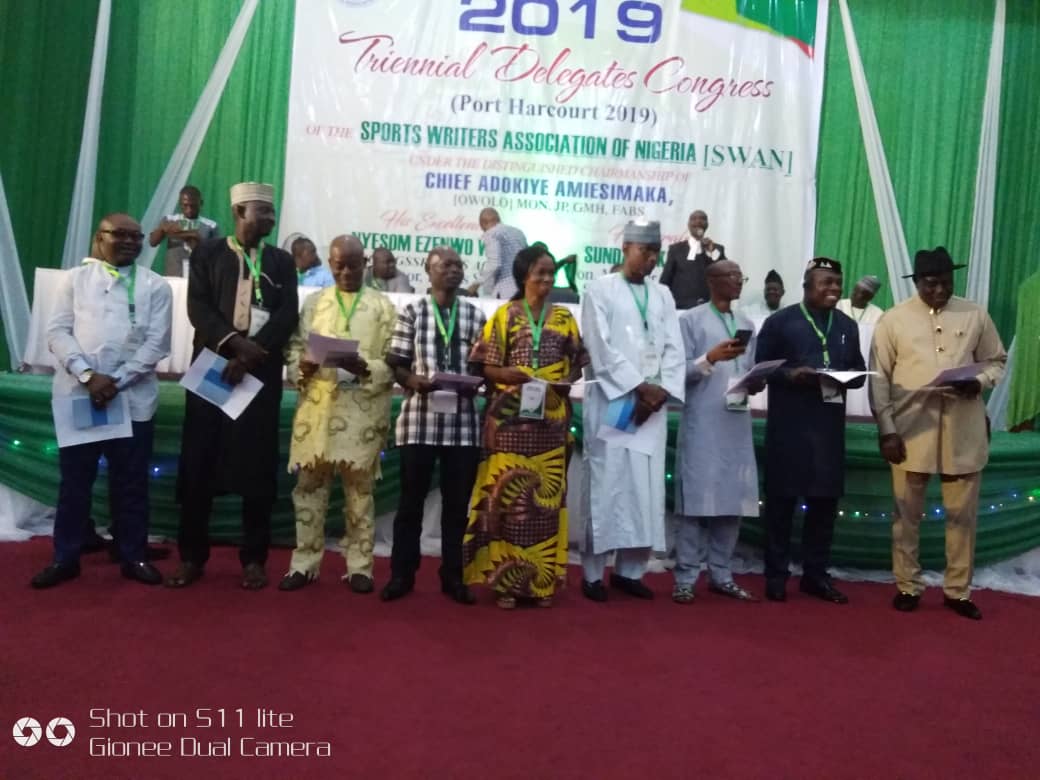 The Sports Writers Association of Nigeria SWAN, has re -elected Mr. Honour Sirawoo as National President for a second term of three years.

This was the outcome of the 2019 Triennial Delegates Congress of SWAN held in Port Harcourt, Rivers State as delegates from 30 States of the Federation and the Federal Capital Territory on Monday 7th of October 2019 unanimously endorsed him through a voice vote.

The exercise which held at the Auditorium of Rivers State House of Assembly, on Moscow road PortHarcourt was witnessed by Rivers State Governor, Nyesom Ezenwo Wike who was ably represented by the Secretary to the Rivers State Government, Barr Tami Danagogo (Former Minister of Sports), Chief Adokiye Amiesimaka (Chairman), Mr Mitchell Obi (AIPS President),  the immediate past NUJ President, Mr Chuka Momah (former Table Tennis President) and all past SWAN Presidents and Deputy presidents among others including delegates from Guild Editors and NAWOJ.

The positions of Deputy President, Vice President, North West and  Deputy Secretary General were declared vacant by the Chairman of the SWAN Electoral Committee, SWANECO, Mr Isaiah Benjamin who is also SWAN Chairman of Kaduna State.

He said the vacant positions would be filled in due course as some of those who purchased the forms were not present, thereby contravening the Statutes of the Association.

In his acceptance speech shortly after their swearing in on behalf of his NEC members, President Sirawo thanked the delegates and all that made the congress a success promising to ensure that the gains recorded in his first term is consolidated on.

Meanwhile, the sports writers’ body has made amendments to its statutes among following the incidents that surrounded the just concluded triennial congress in other to uphold the welfare and rights of its members.

In a communiqué released after its congress last Tuesday at the Auditorium of the Rivers State House of Assembly, PortHarcourt SWAN among other issues raised;

commended the SWAN Electoral Committee (SWANECO) for organising a transparent, free, fair and credible election that produced a new National Executive led by Honour Sirawoo and expressed confidence in his leadership.

“Congress lauds the robust resolve of the entire membership of the Association to resist moves from some quarters to subvert the 2019 National Triennial Delegates Congress, which successfully held in Port Harcourt from Sunday October 6, 2019 to Wednesday October 9, 2019. We commend the peaceful and orderly manner in which the Congress held.

“The statute review committee presented its final draft amendment report to the Triennial Delegates Congress, where it was reviewed clause by clause and consequently approved for effective implementation with effect from Tuesday October 8, 2019.

“The new SWAN Statute created the positions of Welfare Director to be voted for at the national level, Zonal Secretary and Zonal Treasurer to be appointed by the Vice Presidents at the six (6) zones subject to NEC approval.

“Congress urges government and organisers of the 20th National Sports Festival in Edo State (Edo 2020) to ensure that facilities are up to international standard ahead of the fiesta. Congress also tasks SWAN representatives in the organising committee to give good representation.

“Follwing Nigeria’s recent poor performances in major sub regional, continental and global competitions, Congress expresses worry over the poor preparations of the nation’s athletes and frowns at the reported litany of corrupt practices bedeviling sports administration in the country.

Congress however expressed appreciation to His Excellency, Barrister Nyesom Ezenwo Wike, the Executive Governor of Rivers State for his immense support for the Association and commends his giant strides in sports and other spheres of development.