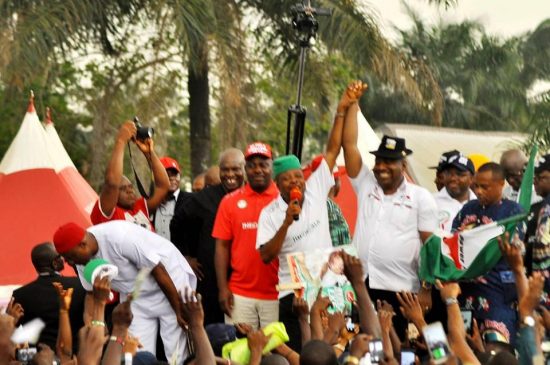 By Onyekachi Eze
The member representing Aboh Mbaise State constituency in Imo State House of Assembly, Hon. Chief Eddy Obinna has made revelations surrounding his move to the All Progressive Congress, APC.
Hon. Eddy Obinna, alongside 6 other lawmakers, including the Speaker of the House last Tuesday defected from the People’s Democratic Party, PDP, to APC.
Since then, there have been mixed reactions trailing the defection of the Aboh Mbaise man, who coincidentally is an immediate representative of the Imo former governor, Ihedioha in the State legislature.
However, in an interactive session with Journalists in his office yesterday, Chief Eddy Obinna described the rumour that he betrayed both Ihedioha and his constituency as not only baseless, but an act of incitement.
He disclosed that there is nothing like betrayal in politics, but, hence it has to do with representation, once the people you are representing gives a go-ahead-order, one has to listen to their voices and request.
“Who am I betraying? Aboh Mbaise people who elected me, gave me their support and are still with me?
The lawmaker opined that his constituents elected him to legislate, adding that part of the functions of a legislature is to do a legislative work, oversight, and of course, empowerment of the people.
Giving more reasons for leaving his party to later, Hon Eddy Obinna said,
“I represent a constituency, Aboh Mbaise in the Imo State House of Assembly, and I am elected. My constituents were not happy when one of my constituents, the former governor of Imo State, Rt Hon Emeka Ihedioha lost in the Supreme Court, the apex court of the country.
“We were sad, all of us from Aboh Mbaise were worried, it was like the lives of all of us have come to an end, but as there is time and season for everything in life, our people came together again; the elders and leaders including the former governor, His Excellency, Rt Hon Emeka Ihedioha and asked me to continue in representing them at the House of Assembly, and to my very best, to bring home to my people, the dividends of democracy for which they elected me to serve them”.
He continued, “So where I am now, my people approved of it, and they are absolutely in support of my movement”.
He pointed out that his constituents categorically beckoned on him to ensure that the dividends of democracy does not elude them, stressing that such cannot be possible while in the opposition or minority, if not in the ruling party.
“I cannot be in an opposition party or in minority party and get dividends of democracy for my people. We can lose two things at the same time”.
Responding to a question on recall by both the PDP and his Local Government, the vibrant legislator dismissed such rumour, pointing out that he is yet to hear from any angle, and as such cannot respond to what is not yet formal.
He reassured his people of a sound representation, reminding them that he can take any pains just to make them proud, the way they unanimously elected him to the House of Assembly.