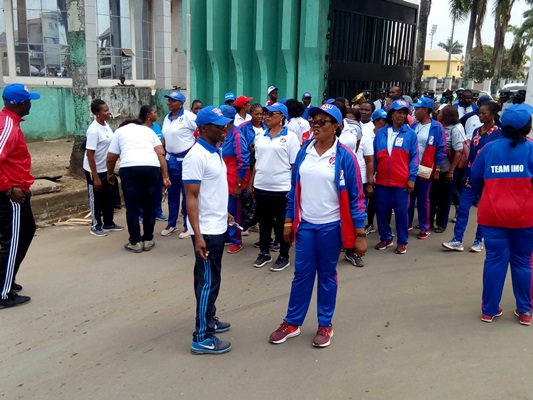 The Imo state government of Sen Hope Uzodinma has pledged to build more sporting facilities in other to strengthen the state’s chances of getting the hosting right for the 2022 National Sports Festival.
Making the pledge in his office over the weekend while receiving the Bid Inspection Committee led by its chairman, Arc Katmwan Dungse the Chief of Staff Imo government house, Barr Nnamdi Anyaehie said, “this administration in line with its 3 -“R” mantra of Reconstruction, Recovery and Rehabilitation will work tirelessly to ensure that sports regains its glory.
He assured that beyond obvious satisfactory facilities on ground, that the government under the leadership of a sports loving governor, Sen Uzodinma is poised to add more state of the art facilities. |
Barr Anyaehie maintained that award of contracts for specialized areas have been done and that the contractors are being supervised to deliver on the terms required.
The Chief of Staff however expressed governments enthusiasm to host the National Sports Festival that will be standard for future events.
Earlier, the Director of Sports in Imo Sports Commission, Mrs Chizotam Aretola after leading the bid inspection committee round the facilities on ground including those still under construction said the sports commission is doing all within its power to ensure that Imo is found worthy to host the next Sports Festival.
She said the state has all the facilities that will be required for the hosting of the 2022 NSF expressing optimism that the government is willing and capable of taking sports in the state to the next level.
In his remark, chairman if the bid inspection committee, Arc Katmwan Dungse said they were impressed with what they met on ground and that they will file in their report for the appropriate quarters to do the needful.
Aretola accompanied by some management staff of the Imo Sports Commission including; Mrs Ngozi Anyanwu, Admin secretary, Mrs Patrecia Ezeji, PRO among others visited the facilities in Okigwe, Dan Anyiam stadium Owerri, the Arsenal Golf Course in Obinze, the Standard Tennis Club, Owerri and Alvan Ikoku Federal College of Education, Owerri were the HOD Department of Health & Physical Education, Dr Okoroafor stated that his school is always ready to partner the state government and the state sports commission in taking sports to the next level.
He commended the state for their efforts to ensure that sports is progressive adding that his committee have visited three other states including Imo in the first phase of the bid inspection and that in few days they will visit the remaining states who are also biding.
Other members of the 2022 NSF bid inspection committee include; Dr Simeon Ebhogieye, Dr Olusegun Akinlotan, Mr Peter Nelson, Mrs Nana Wophil, Mr Dan Adokiye, Mr Olalekan Alabi (Secretary).
The host of the 2022 National Sports Festival will be announced during the closing ceremonies of this years edition at Edo state on April 2, 2020.