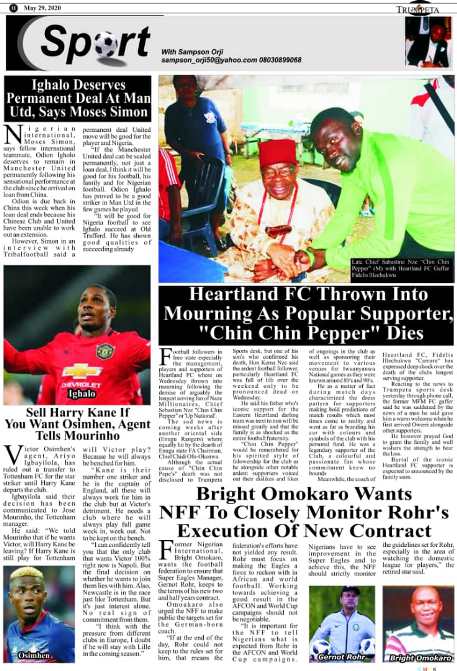 Football followers in Imo state especially the management, players and supporters of Heartland FC where on Wednesday thrown into mourning following the demise of arguably the longest serving fan of Naze Millionaires, Chief Sebastian Nze “Chin Chin Pepper” or ‘Up National’.
The sad news is coming weeks after another oriental side (Enugu Rangers) where equally hit by the dearth of Enugu state FA Chairman, Chief Chidi Ofo-Okenwa.
Although the actual cause of “Chin Chin Pepe’s” death was not disclosed to Trumpeta Sports desk, but one of his son’s who confirmed his death, Hon Kema Nze said the ardent football follower, particularly Heartland FC was full of life over the weekend only to be pronounced dead on Wednesday.
He said his father who’s iconic support for the Eastern Heartland darling team was next to non will be missed greatly and that the family is as shocked as the entire football fraternity.
“Chin Chin Pepper” would be remembered for his spirited style of folowership for the club as he alongside other notable ardent supporters voiced out their dislikes and likes of ongoings in the club as well as sponsoring their movement to various venues for Iwuanyanwu National games as they were known around 80’s and 90’s.
He as a matter of fact during match days characterized the dress pattern for supporters making bold predictions of match results which most times come to reality and went as far as branding his car with colours and symbols of the club with his personal fund. He was a legendary supporter of the Club, a colourful and passionate fan whose commitment knew no bounds
Meanwhile, the coach of Heartland FC, Fidelis Illechukwu “Camara” has expressed deep shock over the death of the clubs longest serving supporter.
Reacting to the news to Trumpeta sports desk yesterday through phone call, the former MFM FC gaffer said he was saddened by the news of a man he said gave him a warm welcome when he first arrived Owerri alongside other supporters.
He however prayed God to grant the family and well wishers the strength to bear the loss.
Burial of the iconic Heartland FC supporter is expected to announced by the family soon.