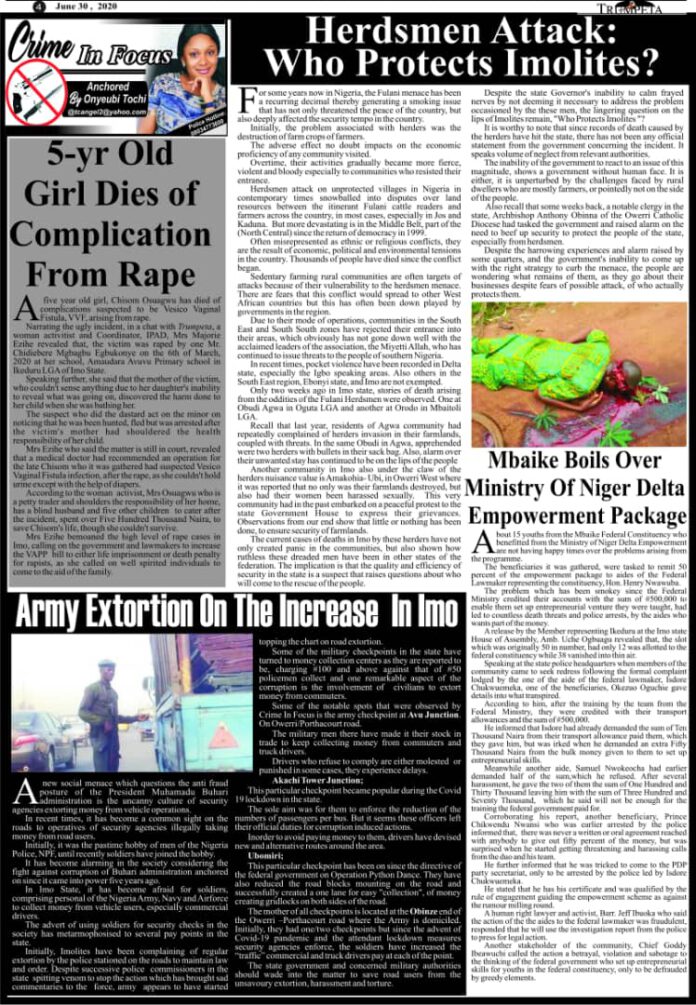 For some years now in Nigeria, the Fulani menace has been a recurring decimal thereby generating a smoking issue that has not only threatened the peace of the country, but also deeply affected the security tempo in the country.

Initially, the problem associated with herders was the destruction of farm crops of farmers.
The adverse effect no doubt impacts on the economic proficiency of any community visited.

Herdsmen attack on unprotected villages in Nigeria in contemporary times snowballed into disputes over land resources between the itinerant Fulani cattle readers and farmers across the country, in most cases, especially in Jos and Kaduna. But more devastating is in the Middle Belt, part of the (North Central) since the return of democracy in 1999.

Often misrepresented as ethnic or religious conflicts, they are the result of economic, political and environmental tensions in the country. Thousands of people have died since the conflict began.

Sedentary farming rural communities are often targets of attacks because of their vulnerability to the herdsmen menace. There are fears that this conflict would spread to other West African countries but this has often been down played by governments in the region.

Due to their mode of operations, communities in the South East and South South zones have rejected their entrance into their areas, which obviously has not gone down well with the acclaimed leaders of the association, the Miyetti Allah, who has continued to issue threats to the people of southern Nigeria.

In recent times, pocket violence have been recorded in Delta state, especially the Igbo speaking areas. Also others in the South East region, Ebonyi state, and Imo are not exempted.

Only two weeks ago in Imo state, stories of death arising from the oddities of the Fulani Herdsmen were observed. One at Obudi Agwa in Oguta LGA and another at Orodo in Mbaitoli LGA.

Recall that last year, residents of Agwa community had repeatedly complained of herders invasion in their farmlands, coupled with threats. In the same Obudi in Agwa, apprehended were two herders with bullets in their sack bag. Also, alarm over their unwanted stay has continued to be on the lips of the people

Another community in Imo also under the claw of the herders nuisance value is Amakohia- Ubi, in Owerri West where it was reported that no only was their farmlands destroyed, but also had their women been harassed sexually. This very community had in the past embarked on a peaceful protest to the state Government House to express their grievances. Observations from our end show that little or nothing has been done, to ensure security of farmlands.

The current cases of deaths in Imo by these herders have not only created panic in the communities, but also shown how ruthless these dreaded men have been in other states of the federation. The implication is that the quality and efficiency of security in the state is a suspect that raises questions about who will come to the rescue of the people.

Despite the state Governor’s inability to calm frayed nerves by not deeming it necessary to address the problem occasioned by the these men, the lingering question on the lips of Imolites remain, “Who Protects Imolites “?

It is worthy to note that since records of death caused by the herders have hit the state, there has not been any official statement from the government concerning the incident. It speaks volume of neglect from relevant authorities.

The inability of the government to react to an issue of this magnitude, shows a government without human face. It is either, it is unperturbed by the challenges faced by rural dwellers who are mostly farmers, or pointedly not on the side of the people.

Also recall that some weeks back, a notable clergy in the state, Archbishop Anthony Obinna of the Owerri Catholic Diocese had tasked the government and raised alarm on the need to beef up security to protect the people of the state, especially from herdsmen.

Despite the harrowing experiences and alarm raised by some quarters, and the government’s inability to come up with the right strategy to curb the menace, the people are wondering what remains of them, as they go about their businesses despite fears of possible attack, of who actually protects them?

Narrating the ugly incident, woman activitist and Coordinator, IPAD, Mrs Majorie Ezihe revealed that, the victim was raped by one Mr. Chidiebere Mgbagbu Egbukonye on the 6th of March, 2020 at her school, Amaudara Avuvu Primary school in Ikeduru LGA.

Speaking further, she said the mother of the victim who couldn’t sense anything due to her daughter’s inability to reveal what was going on, discovered the harm done to her child when she was bathing her daughter.

The suspect on noticing that he was being hunted, fled but was arrested after the victim’s mother shouldered the health responsibility of her child.

Mrs Ezihe who said the matter was still in court, revealed that a medical doctor had recommended an operation for the late Chisom who it was gathered had suspected Vesico Vaginal Fistula, as she couldn’t hold urine except with the help of diapers.

According to the activisit, Mrs Osuagwu who is a petty trader and shoulders the resposibility of her home, has a blind husband and five other children but has since the incident, spent over Five Hundred Thousand Naira, to save Chisom’s life who unfortunately lost the battle.

She bemoaned the high level of rape cases in Imo, calling on the government and lawmakers to increase the VAPP bill to either life imprisonment or death penalty for rapist, as she called on well spirited individuals to come to the aid of the family.

Army Extortion On The Increase In Imo

While Imolites are complaining of regular extortion by the police stationed on the road to maintain law and order, despite successive commissioners spitting venom on stopping the action which has brought name to the force, it seem to the chagrin of the people that the army have started topping the charts on road extortion.

Some of the military checkpoints in the state have turned to money collection center, charging #100 as against that of #50 for police and sometimes using civilians to take the money from commuters.

Some of the notable spots that were observed by Crime In Focus is the army checkpoint at Avu Junction.

The military men there have made it their stock in trade to keep collecting money from commuters and truck drivers.

Drivers who refuse to comply have either been punished or asked to park for sometime.

Akachi Tower Junction;
This particular checkpoint became popularised during the covid 19 lockdown in the state.

The sole aim was for them to enforce the reduction of the number of passengers per bus, but it seem these officers left their official duties for a second one.

Inorder to avoid paying money to them, drivers have devised new and alternative routes around the area.

Ubomiri;
This particular checkpoint has been since the directive of the federal government on Operation Python Dance. They have since reduced the road block but they have successfully created a one lane for easy “collection”, leaving behind gridlock on both sides of the road.

About 15 youths from the Mbaike Federal Constituency who benefitted from the Ministry of Niger Delta Empowerment are not having happy times over the problems arising from the programme.

The beneficiaries it was gathered, were tasked to remit 50 percent of the empowerment package to aides of the Federal Lawmaker representing the constituency, Hon. Henry Nwawuba.

The which been smokey since the Federal Ministry credited their accounts with the sum of #500,000 to enable them set up entrepreneurial venture, had led to countless death threats and police arrests, by the aides who wants part of the money.

A release by the Member representing Ikeduru at the Imo state House of Assembly, Amb. Uche Ogbuagu the slot was originally 50 in number but only 12 was allotted to the federal constituency while the remaining, vanished into thin air.

Speaking at the state police headquarters when members of the community came to seek redress following the formal complaint lodged by the one of the aide of the federal lawmaker, Isdore Chukwuemeka, one of the beneficiaries, Okezuo Oguchie gave details into what transpired.

According to him, after the training by the team from the Federal Ministry, they were credited with their transport allowances and the sum of #500,000.

Meanwhile another aide, Samuel Nwokeocha had earlier demanded half of the sum which he refused. After several harassment he gave the two of them the sum of One Hundred and Thirty Thousand leaving him with Three Hundred and Seventy Thousand which will not be enough for the training the federal government paid for.

Corroborating his report, another beneficiary, Prince Chikwendu Nwansi who was earlier arrested by the police said, there was never a written or oral agreement reached with anybody to give out fifty percent of the money , but was surprised when he started getting threatening and harassing calls from the duo and his team.

He further informed that he was tricked to come to the PDP party office secretariat only to be arrested by the police led by Isdore Chukwuemeka.

He informed that he has his certificate and was qualified by the rule of engagement guiding the empowerment scheme as against the rumour milling round.

A human right lawyer and activist, Barr. Jeff Ibuoka who said the action of the the aides to the federal lawmaker was fraudulent said he will use the investigation report from the police to press for legal action.

Another stakeholder of the community, Chief Goddy Ibeawuchi called the action a betrayal, violation and sabotage to the thinking of the federal government to set up entrepreneurial skills for youths in the federal constituency, only to be defrauded by greedy elements.