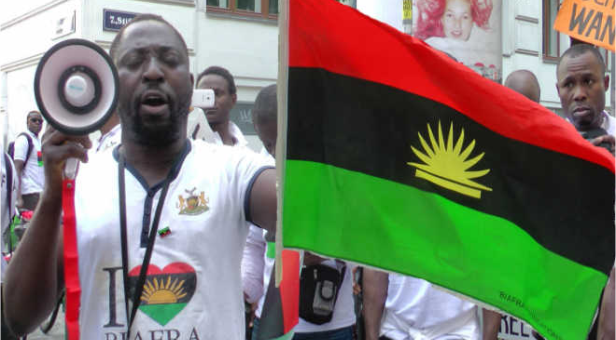 Tension is gradually building high in Imo State over reports that members of the Indigenous People of Biafra, IPOB, are planning to attack security agencies in the state.
Police had earlier arrested about 67 member of the group where the commissioner of police, Isaac Akinmoyede, alleged that the group were planning to strike at security agencies.
The statement by the police has sparked off fear in the minds of the residents who are worried that the arrest of suspected members of the Pro Biafra group is an indication that danger looms.
According to the police chief, the outlawed group had allegedly attacked his men and snatched service rifles from them.
Alleged that the suspects had travelled to Ohaji/Egbema LGA to meet a native doctor to prepare charms for them against bullet penetration.
Akinmoyede said that investigation by the Command disclosed that the IPOB were allegedly planning to attack security agencies in the state with the aim of snatching service rifles.
In the statement, the CP said “On the 9th of August, 2020, at about 06:30hrs, 67 members of the IPOB converged somewhere in Orji, Owerri North LGA, and took off to Egbema.
“At about 09:30hrs, operatives of the 34 Field Artillery Brigade, while on duty at Mmahu Egbema checkpoint, intercepted 67 members of the IPOB and called for reinforcement from the Divisional Police Headquarters, Egbema.
“The operatives of the Division swiftly mobilised to the scene and assisted in the evacuation of the suspects to the Divisional Police Headquarters for further action.
“It was however revealed that the suspects were on their way to a native doctor to fortify themselves against bullet penetration. It is believed that the group is planning an attack on security agencies with the aim of snatching weapons.”

Uzodinma: Expose Me If I Steal Imo State Govt Money Says No Salary Hope For Over 10,000 Suspected Ghost Workers