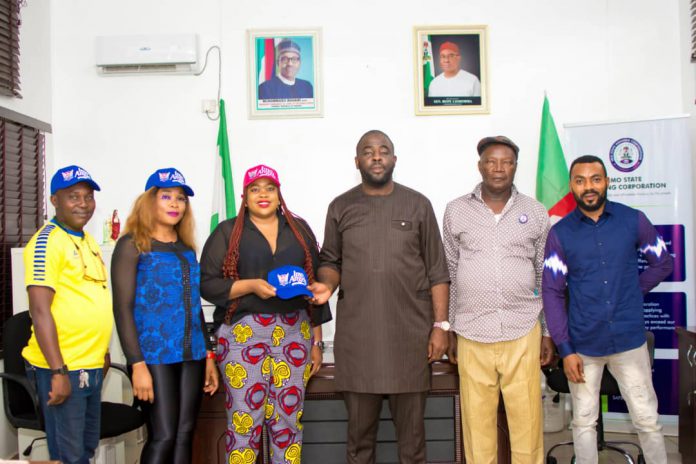 Spurred by the vision and desire to ensure that the girl child in our society are given good platform to excel, Jenny Angels FC management has partnered Pamtech Group to empower them through sports.
This partnership was conceived during an interface with the Chief CEO of Pamtech Group, Engr Ndubuisi Chidomere at his Pamtech Automobile Plant along PortHarcourt road, Owerri on Tuesday which also was used to unveil Engr Chidomere as a Super supporter of Imo Angels FC.
In his introductory speech the Chairman of the club, Lady Jenny Anusiem who was accompanied by some officials of the club including Lady Anyiam Constance Ijeoma noted that the club is an offshoot of her foundation, Jenny Uzo Foundation and her desire to give the girl child especially talented one’s a platform to develop their God’s given talent with the view of becoming professionals as well as responsible citizens for themselves, their family and the society at large.
She however explained that Imo Angels FC management is on partnership drive shopping for corporate organizations and well meaning individuals who share in their vision and mission to actualise their dream.
Reacting, the CEO of Pamtech Group, Engr Ndubuisi Chidomere said;
“Our company which also runs a foundation on its own is striving to be a beacon of light; bringing value and prosperity to everyone we encounter.
“With interests predominantly in the energy and automotive industries, Pamtech’s wider activities encompass the marketing, transportation and distribution of petroleum products, automotive products and services, logistics and diversified investments.
While expressing his love over Imo Angels Concept, Engr Chidomere said his foundation equally has programmes for the youths who are vulnerable with a total shift from the normal norm of youths acquiring certificates without job.
He explained that they are providing opportunity for this youths with passion to acquire skills and provide them with scholarship with the view of becoming self employed and entrepreneurs of their own.
Engr Chidomere pledged his support and partnership with Imo Angels commending Lady Anusiem for conceiving such wonderful dream.
Meanwhile, the General Manager of Imo Housing Corporation, Barr Chinedu Mbakwe has commended the founder and President of Imo Angels FC for her laudable assuring that his corporation would love to support the move to empower the girl child.
Barr Mbakwe who made this known when the management team of the female club paid him a courtesy visit at his office along MCC/Uratta road Owerri, also used the medium to appreciate Governor Hope Uzodinma for carrying the youths along in his 3R administration with about four youths below the age of 40 manning government agencies.
He maintained that Imo is blessed with talents including the girl child adding that any programme that can create empowerment and employment opportunities for youths of Imo state would loved and appreciated by the state government.
While enumerating the responsibilities of Imo Housing Corporation which includes providing good and quality housing for imolites the General Manager also pledged that he and his corporation won’t hesitate to support the wonderful efforts of Imo Angels.
Barr Mbakwe was also unveiled as a super supporter of Imo Angels FC which was also witnessed by the Director in charge of Finance in Imo Housing.