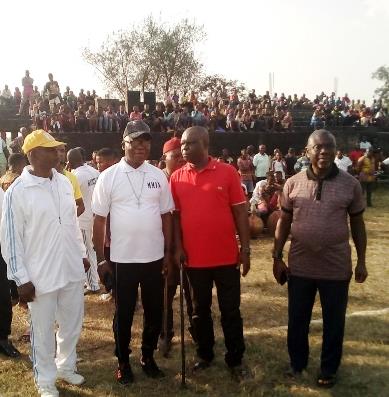 Saturday December 6, 2020 will ever remain memorable in the life of the good and enterprising people of Mbutu Community in Aboh Mbaise LGA as the well announced “Mbutu Unity Cup” kick-started at the Mbutu mini stadium with fun fair.
The MMPA Unity Cup opening ceremony which attracted many dignitaries from especially the sporting world can  best  be discibribed as “Mbutu Sports Carnival”.
The tournament which sponsored by the MMPA Mayorate with the trophy donated by a Canadian sports loving patriotic son of Mbutu by name, Chief Sir Joseph Onwuemeodo was kicked off by one of the most decorated football administrator in Nigeria and former President of the Sports Writers Association of Nigeria SWAN, Chief (Sir) Fan “Ezinwa” Ndubuoke in company of the the Mayor of Mbutu, Evangelist (Dr) Leo Obi Nwaigwe among other prominent leaders of the Community.
According to the Mayor of Mbutu Evang (Dr) Leo Obi Nwaigwe, the sole aim of the Mayorate for setting the Nobel tournament is to harvest young football talents who can be projected to the larger football community to become professionals as well as responsible sons of the area and the state at large.
In keeping to this feat, the Heartland football team where also in attendance through its Chief Scouting Officer who at the end of the opening encounter penned some players for a trial with Heartland FC.
In the opening match which held between Mbutu -Nweorie and Mbutu -Ukwu was won by Mbutu Ukwu 2-1.
Indeed, the Mayorate of Mbutu Mbaise  is truly unifying its people and the area through sports, some of the sons and daughters of Mbutu who wittnessed the thrilling opening match reacted to Trumpeta sports desk.

Excitement and joy last Sunday enveloped Amawom Autonomous community in Owerri Municipal Council as the 2020 Cottage Mills Venture powered  Unity Football Competition for all the Kindreds in the Community kicked off.
Speaking to Trumpeta sports desk at the Old Township Stadium, Owerri shortly after taking the official ceremonial kick off, Youth Chairman of Amawom Autonomous community, Mr Nnadi Elvis Uzoma lauded Cottage Mills Venture for the wonderful support they are giving to the tournament including kitting the entire teams with 2 sets of Jessie’s, home & away colours.
Mr Uzoma who also used the medium to admonish the participating teams on the need to play according to the rules of fair play maintained that the competition is  aimed at fostering peace and unity among the kindreds.
The opening encounter which was well attended by sons and daughters of Amawom Autonomous community includes; Hon Solomon Anukam, Member for Owerri Municipal at the Imo House of Assembly and Chief Ambrose Nkwodinma, TC Chairman, Owerri Municipal Council among other dignitaries.
The opening encounter between Umu Ekeonunwa and Umu Okoro ended 1- 0 in favour of Umu Eke Onunwa while in the next game today at the Old Township stadium, Umu Okorie takes on Oguoma na Nneke, just as Umu Njemanze squares up against Umu Ereprenwa on Thursday by 4pm.

HOW SUPER EAGLES DOCTORS MADE OSIMHEN’S INJURY WORSE – NAPOLI
According to Italian news, Napoli medics allege that Nigerian team doctors did further damage to Victor Osimhen’s shoulder while trying to set it back into place.
The Napoli striker dislocated his shoulder during Nigeria’s 4-4 draw with Sierre Leone in an Africa Cup of Nations qualifier on November 13.
Super Eagles medical staff tried to set the joint right on the field, before Osimhen was then removed from the match. The 21-year-old then returned to Italy for tests and a specialist consultation.
The Italian tabloid claim that the shoulder dislocation has fully recovered, but Osimhen still can’t lift his arm properly and remains unavailable for the Neapolitans
This is allegedly because the incorrect technique used by the Nigerian doctors inflamed a tendon in his shoulder.
“The shoulder is now in place, the problem concerns the arm that has a reduced sensitivity and cannot lift”.
“Apparently, in the manoeuvre to reduce the dislocation, the staff of the Nigerian national team made a tendon inflame. Maybe he could make it for the match against Sampdoria [13 December], with little optimism from the club.”