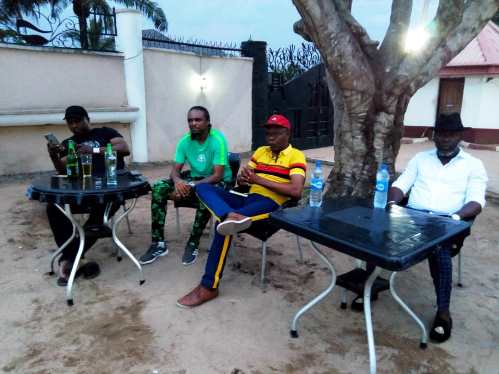 Papilo FC Academy, Owerri on Sunday held their 2020 end of the year party amidst fun fare.
The event which held at the Nwankwo “Papilo” Kanu’s Hotel along Egbu road off Relief Junction was equally used to mark the clubs 20years of existence since 2000 and presentation of awards to the outstanding players including the U-13, U-15 and U-17 sides.
In his remark the Club President, Ambassador Nwankwo “Papilo” Kanu adviced the players to always remain focused, disciplined and dedicated with their trainings as well as their education.
He recalled how he used to walk from Amakohia to City School (then Township School) on Wetheral road for trainings and also helped his parents with house shores pointing that even their advice against playing football didn’t deter him from staying focus.
Reading out the clubs performance since 2000, he noted Papilo FC Academy has achieved the followings;
Took over 29 players to Europe for exposure in 2002.
Has produced over 30 players who are currently playing in nations league cadres and in Europe.
Has equally provided opportunity for players and across the  Globe.
Played in Nigeria Nation Wide League for Five seasons before gaining promotion.
Also played in the Nigerian National League NNL, alongside Heartland FC in 2017, winning the Imo State FA Cup now know as Aiteo Cup.
The team is currently in partnership with Key Stone Secondary & Primary School to give opportunities to young talented players in that age bracket.
Papilo FC Academy is also in partnership with Leeds United in England and at least 3 of Papilo FC players were in Leeds United for training.
In his own comments, the Club Coordinator, Mr Sam Anozie charged the players not to over clelebrate during this Yuletide period reminding them that their trains continues and that they must always be good ambassadors of the club.
The Academy Chief Coach, Chidiebere Okeoma “Coach Wayo” also used the medium give the clubs statistics in the season under review which puts the total clubs matches at 46 winning 38, drawing 5 and losing only 3.
Some of the dignitaries who attended the event include; Chief Emeka “The Mayo of Abuja”, Chief MIC, CEO Bethel Real Estates, Barr Ifeanyi Dike, Imo FA Legal Adviser, Chief Odinaka, CEO Crown Aluminum Company, Owerri and Stanley Onuegbu, former captain Iwuanyanwu National/Heartland FC among many others.