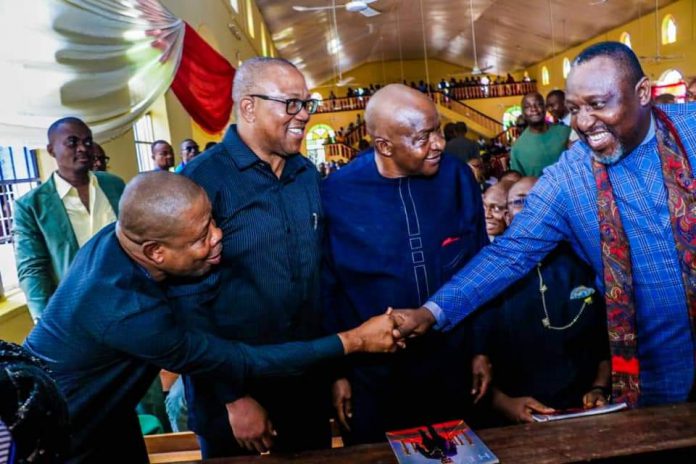 Although the 2023 general elections in Nigeria may still be far, but such notion may not be applicable to some politicians, as the scheming for next polls have apparently commenced.

Among the politicians under this cadre is a former Governor of Imo State, Senator Rochas Okorocha, whose body language may be speaking deeper of his desires to either go back to the Senate or go higher for the Presidential seat.

Okorocha who represents Imo West Senatorial District in the Senate, is said to be in a hot political romance with the Rivers State Governor, Ezenwo Nyesom Wike, one of the respected operators and financers of Peoples Democratic Party, PDP.

While Rochas Okorocha is one of the founding fathers of the ruling All Progressives Congress, APC, and remains a card carrying member till date, Governor Wike is a die-hard member of the opposition party, the People’s Democratic Party, PDP.

However, there may be more than meets the eye, considering the recent affinity that exists between the two political leaders of South East, and South South.

Information gathered by Trumpeta Newspaper revealed that the former Imo State governor was a special guest in Rivers State, in an invitation extended to him by the PDP State governor, Wike.

Okorocha’s move to Porthacourt and fresh romance with Wike is raising speculations that the Ogboko born ex governor would port to PDP in pursuit of his suspected Presidential ambition.

Even though sources denied the allegation, but Governor Hope Uzodinma in one of his media war with Okorocha disclosed that Owelle Okorocha only had an ambition of destroying APC, before joining PDP.

What may have also given rise to the permutation of Okorocha’s possible party switch to PDP is his current travails in APC where the State governor, Senator Hope Uzodinma is not giving him safe landing in the party.

Furthermore, the recent confirmation of the Chief  Marcon Nlemigbo led State Working Committee of APC in Imo, which gave the Uzodinma’s camp upper hand may be enough reason for Okorocha to look for a safe landing before the expected year, 2023.

The development, many felt, may be a preparatory exit of the ex governor from APC to PDP, believing that by having a close relationship with Wike would soften the grounds for his entry.

However, Okorocha spokesman, Chief Sam Onwuemedo was quoted to have said that Okorocha was sighted in Rivers State commissioning projects is not enough reason to speculate he was on his way in joining PDP.

Onwuemedo disclosed that before now, Gov Wike had invited other top APC members, including sitting Governors to commission projects in Rivers State without anybody alleging defection plans.

Onwuemedo asked “Why is it that when Okorocha coughs, some people catches fever?”