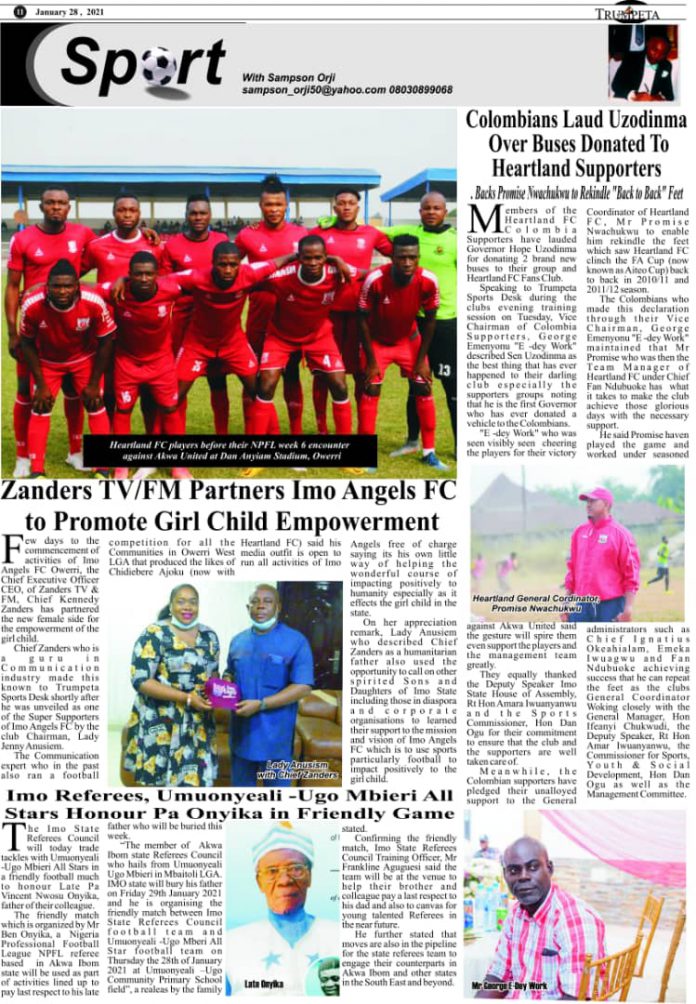 The assistant gaffer of Heartland FC, Coach Charles Uzor has expressed optimism that the Owerri landlords will earn their first away points of the season on Sunday when they when they visit Kaduna venue for their game with Jigawa Golden Stars in Matchday 7 of the Nigeria Professional Football League NPFL.
The former Heartland’s feeder team coach hinged his optimism on the club’s level of preparations for the tie as well as factors he feels could tilt the result in their favour at the end of the game billed for the Ahmadu Bello Stadium, Kaduna.
Coach Uzor insisted that the Naze Millionaires can  benefit from the touchline ban of Jigawa’s gaffer, Gilbert Opana and the neutral ground (Kaduna) to both teams.
According the ex-Iwuanyanwu defender during a chart with Heartland media;
“For us in Heartland FC with the level of our preparations for the weekend I can say confidently that we are going to Kaduna for the 3 maximum points.
“We are yet to pick any point away from home and it is the reason we are working so hard to ensure we end that this weekend.
“I believe they are presently unstable and unbalanced with their technical head barred from taking part in the game.
“That is going to play a very big role against them and also they are playing away from their natural home.
“It is a neutral ground and by the grace of God all things being equal I strongly believe we are going back home with three points or in a worst-case scenario we must go home with at least a point on Sunday.”
Meanwhile, Heartland FC leading scorer, Shedrack Oghali has set for himself a top target and is eager to leave a good mark at the Naze Millionaires before seeking greener pasture.
Oghali has struck a goal each against Nasarawa United, Enyimba and Rivers United in the ongoing season and the former Go -Round FC striker said in an interview that he would be a fulfilled man if he scores up to 10 goals and more by the time the season ends.
“Playing under a good coach that loves you and having teammates that have turned to my friends and my family too have all served as my sources of encouragement,” Oghali said in quotes credited to the club’s media.
“My inspiration is to ensure I leave a legacy for people to remember me after I might have left Heartland FC and the target I have for myself is crossing the number of goals I have never got to before since I have been playing. I want to cross 10 goals this season,” the hard fighting striker expressed.
Oghali said that they are on a mission to pick at least a point in Kaduna against Jigawa Golden Stars on Sunday in a Matchday Seven NPFL tie.
Heartland go into the tie against Jigawa FC with two wins and four losses and are 17th on the table with six points from six games.