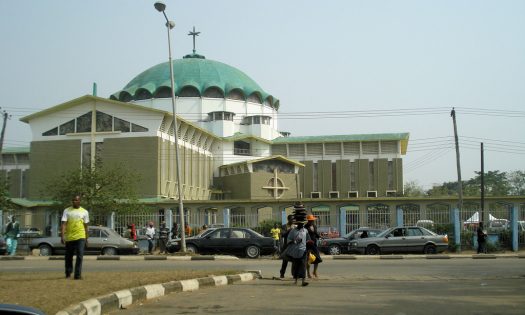 A culminating rift by the Azaraubo community against the Imo State Government was quelled in totality today, 26th May, 2021, as the member representing Owerri North State Constituency, Hon. Amb. Philip Ejiogu, intervened and  a harmonious conclusion to it.
Recall, that the two villages (Ubowalla and Uboegbelu) of Azaraubo Autonomous Community, had a peaceful protest last week, in respect to a presumed conversion of the Agricultural Land, located in their villages, for RUGA project.
In a bid to get a first hand knowledge of the issue, address it and restore peace, Hon. Philip Ejiogu, convened a meeting of the Ezes, Town Union President General, Women & Youths Presidents of Azaraubo, Akaliukwu and Ezemba Emekuku communities and major stakeholders of Azaraubo Autonomous Community, on the 20th of May, 2021.
The House member expressed dismay that a project of such magnitude would be carried out without proper consultation to his office, the Traditional Ruler and other major stakeholders of the Community.
He however promised to ensure a lasting peace is achieved.
Consequently, it was discovered that the project is not RUGA, but a National Agricultural Land Development Authority initiative.
A meeting of the Government, Land Development Authority and the Community was convened by the Honourable member, yesterday, the 26th of May, 2021.
Representing the Government is the Special Adviser on Security, Rtd. CP Dan Okoro. He re-assured the indigenes that the Government only intends to reactivate all Agricultural Land in the State and assured that No Cattle or Cow rearing would be seen around the premises. He therefore called for the corporation of the Community as this would generate employments and lead to greater development of the area.
The State Representative of NALDA, Mr. Amanze Ofor, re-iterated the fact that aside, Cattle rearing, the project aim at ensuring food sufficiency, employment creation of our youths and other development purposes. He informed that both the Songhai Farm at Nekede, the Avutu Poultry, Okigwe Cashew farms, Ohaji Adapalm, etc are all being reactivated.
In response, the Village Head of Uboegbelu and other stakeholders present expressed gratitude to the* *Government for remembering to reactivate the farm and apealled that the connecting roads to the Community be rehabilitated.
While thanking the Government for the NALDA initiative, Hon. Philip assured that the Azaraubo people would give them the required support to operate optimally in the area. He maintained that he is interested to see more than 300 indigenes of Host Community and Owerri North people, gain employment as this scheme resumes.
He finally emphasized that the connecting roads leading to the Agricultural Land be rehabilitated, as its being expected that a proper asphalting would be applied as the project gears up.
In agreement with the people, he directed that NALDA recommence work immediately.
On a note of gratitude, the Eze of Azaraubo Autonomous Community, HRH, Eze C.A. Nwamara, the S.A. to the Governor on Culture and Tradition, Hon. Paddy Obinna , The Deputy National Chairman of NLC, Comrade Joe Ajaero, were all happy for the swift and successful intervention by Hon. Philip Ejiogu and expressed gratitude to the Government for the initiative while apealling that they keep to their agreement with the Community.
Present at the meeting were; Hon. Philip Ejiogu,  HRH Eze C.A. Nwamara, Udo II of Azaraubo Autonomous Community,
Hon. Paddy Obinna (S.A. on Culture and Tradition), Rtd CP Dan Okoro (S.A. on Security), Mr. Amanze Ofor (State Rep of NALDA), Dr. Joe Ajaero, Dr. Aloysius Nnaji, Engr. Ikechi Nnaji, Dr. Ekejiuba Njoku, PGs, Women and Youths Presidents of Emekuku Communities, other Community stakeholders .