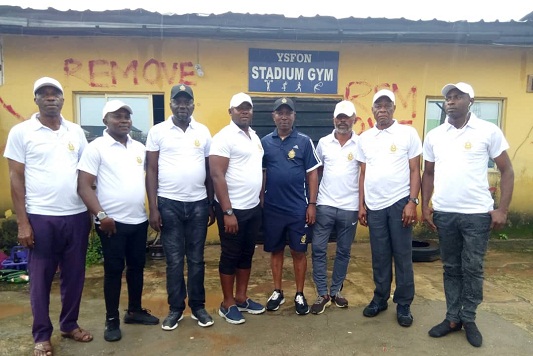 The newest male Football club in Owerri with the mission and vision to groom and nurture talented footballers into future stars, FIRSTMAHI FC commenced its screening exercise on Monday August 9, 2021 at the Township Stadium along tetlow road, Owerri.
The exercise which is overseen by former internationals such Uche Dike, Emmanuel Osigwe, George Ohuabunwa , Tony Egbule Rev Fr Chika Okpara, Uche Anyanwu, Francis Nwokocha (Bobito) and Orji Smapson  is aimed at running a professional football club that will also have an international outlook and to empower the talent football players.
According to the Coordinators of the exercises, Chuks Dike and Tony Egbule, the exercise which will end on Friday will afford the teams technical team the opportunity to access the players who are taking part in the screening and select them for final matches that will shape them into a better and ready team to compete for the Aiteo cup and in the league.
Mr Tony who said the clubs ambition to Trumpeta Sports desk further also revealed that the clubs will enjoy international support from its parent body especially from the President Waliudin MA with the intention for it to be the best club in the nation