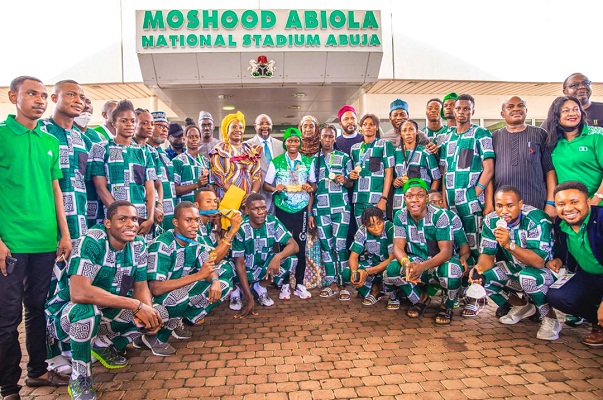 Imo state born Minister of State for Education, Emeka Nwajiuba and the Youth and Sports Development Minister, Sunday Dare with three of their colleagues in the Federal Executive Council hosted the very impressive “Team Nigeria” contingent to the just concluded World Athletics U20 Championships in Nairobi, Kenya.
The Minister alongside his Sports colleague, Hajia Sadiya Farouk, Minister of Humanitarian Affairs, Disaster Management and Social Development as well as Dame Pauline Tallen, Minister of Women Affairs  held a reception for the history making contingent at the Moshood Abiola Stadium, Abuja shortly after they returned to the country on Tuesday.
Nwajiuba and other Ministers in their comments were unanimous in affirming President Buhari’s statement on the team as a confirmation of the faith he has and the support given to young Nigerians who excel in their different areas of endeavour be it sports, education, politics or entertainment.
Meanwhile, the Sports Minister, Sunday Dare praised the team for the unprecedented feat of finishing third(out of 116 countries)on the overall medals table as well as recording Nigeria’s best ever medal haul of four gold and three bronze medals.
He said the giant strides witnessed at the Kenya meet would not have happened without hard work and determination, stressing that the athletes are the future of the sport in Nigeria, a position that was corroborated by the other Ministers who also poured encomiums on them for doing the nation proud.