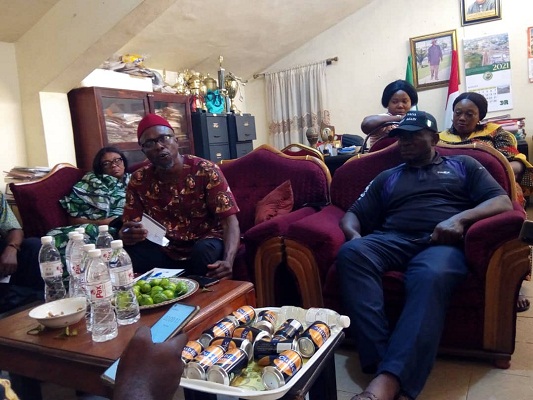 The Acting Director of Sports, Imo State Sports Commission, Mr Emmanuel Metu has expressed the resolve of his administration to revive grassroots sports in the state with the view of harnessing raw talents for future events.
Metu who made this disclosure last Friday in his office during a parley with members of the Sports Writers Association of Nigeria SWAN, Imo state chapter regretted poor number of coaches and athletes in the state sports commission because most of the coaches have retired while the athletes are aged. Metu added that because no waiver has been granted in the past 12 years for athletes to be employed it has become difficult to replace the aging ones.
He however said the  commission under his watch has resolved to change the narrative in the commission for positive results stating that the coaches have been sent to the LGA’s to work directly with the grassroots talents and that he has adopted on the job assessment of the his staff for optimum results.
While lamenting the need for more coaches to be employed, he said the Secretaries in the commission who have also been asked to double as coaches in their area of comparative advantage to complement the coaches work.
Reacting on the states preparedness for the National Youth Games play off at Abakaliki, Ebonyi State which commences this week, Metu noted that the state will take part in 7 games, Cricket, Football, Basketball, Volleyball, Handball, Hockey and Beach Volleyball (male and female) as only one state will represent the south east in each sports at the games proper some time in Ilorin this year.
The former national karate champion and coach as a way of motivation also took time to clear the air on the delay to host and reward athletes of the state at the National Sports Festival in Edo last year revealing that the state Governor will in no distance time receive and reward them as the committee set up for the exercise which is headed by Deputy Chief of Staff Admin, Dr Pat Ekeji and Emmanurl Metu as Secretary have already received athletes regalia for the ceremony.