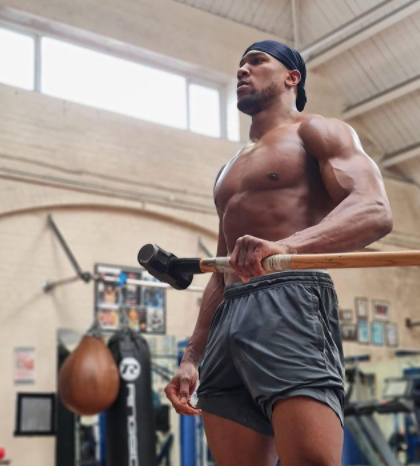 Britain’s heavyweight boxing champion Tyson Fury responded to taunts by fellow British boxing champion, Anthony Joshua, with a promise to beat Joshua inside six rounds of their mega-fight when it comes to pass.
Fury was firing back after comments Joshua made while chatting with Gary Neville’s ‘The Overlap’ programme. Joshua had claimed, when asked about Fury: “I’ll smoke that guy” apparently aware that Fury would be listening and wanting to taunt him.
And Joshua was right because Fury arranged for his own interview to counter Joshua as the counter-puncher he is famous for being. Fury told Neville: “AJ couldn’t smoke a cigarette, never mind smoke the ‘Gypsy King’ “, dropping the nickname with which he became popular.
Fury continued: “The difference between me and him? He’s a businessman and I’m a Spartan. I’ll show him that when I get in the ring. I will absolutely annihilate that bodybuilder. He wouldn’t go past six rounds. It would be over quickly. He knows that and his whole team knows it.”
However, as THEWILL reported, before both fighters will have a chance to have a go at each other, Joshua will first defend his IBF, WBA and WBO belts against Oleksandr Usyk on September 25. Fury is up for the third installment a trilogy bout against Deontay Wilder on October 9.
These bouts disrupted the hopes of many boxing fans expecting to witness greatness with the attempted unification of all the titles under one undisputed heavyweight champion of the world. The date and venue were set for this epic contest before things changed with Wilder legally forcing a third match against Fury.
It brought an end to the laborious and extended negotiations to reach a deal that was favourable to both camps and Saudi Arabia had already picked up the bill for hosting the highly-anticipated fight with an August 14 date set for the bout.
The initial delays that negotiations for the fight faced were blamed on Fury and his camp. Joshua was forced to speak out. He said: “I just know on my end, and my management team and my promoter – we’ve done everything we can to make this happen and as long as I’m champion, I’ll compete with anyone.”
At that time, Fury responded: “I have never been optimistic about this fight happening. Even when the deal was done, I was never optimistic. Guess what? It never happened. I do think, sooner or later, it has to happen.
“Even if we go AWOL, throw all the belts in the bin, to fight each other? I would do that. But I’m not sure he would be willing to do that.”
The two British champions will have to win their September and October matches for it to remain realistically possible for a new set of arrangements to begin so that a new date is set and both camps ready for what still remains a showdown for the modern times.