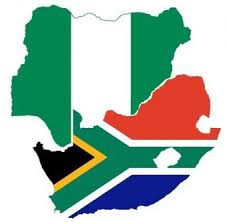 Two of Africa’s most competitive sporting countries, Nigeria and South Africa have proposed cooperation for their mutual benefits in terms of sports, youths, culture and educational development. This was made public by the Honourable Minister of Youth and Sports Development, Sunday Dare.
It came at the instance of a courtesy call paid to the Minister at his Abuja office by a delegation from the Rainbow Nation led by Thamsanga Mseleka, South Africa’s High Commissioner to Nigeria.
Dare noted that the long history of mutual bilateral relationships that have always existed between the two countries could further enhance socio-economic development. He said:
“Clearly, history tells you that both countries have a long standing diplomatic relationship. We have however recently seen a number of unpleasant occurrences that have drawn both countries back to the table to fashion out a part way of resolution.
“This involved mostly youth, who were the victims. But I am happy that just as Nigeria was talking about how to protect the rights of her citizens, particularly the youth population, South Africa was also thinking of doing the same. This will normalize our relationship, as we seek ways of peaceful co-existence.”
Responding to the Minister’s comments, Mseleka said he was open to new vistas of cementing the longstanding diplomatic relationship between Nigeria and South Africa. The High Commissioner also pointed to South Africa’s readiness to partner with Nigeria to work out mechanisms that would strengthen relationships involving the youth in sports, culture and education.
The South African diplomat did not fail to mention their excitement about the participation of South Africa’s women’s national football team, Bayana Bayana, in the imminent Aisha Buhari Cup competition soon to kick off in Lagos.
It was an example of the history of mutual appreciation and cooperation that had marked the ongoing relationship between both countries and will be at the foundation of their rededication to shared growth.