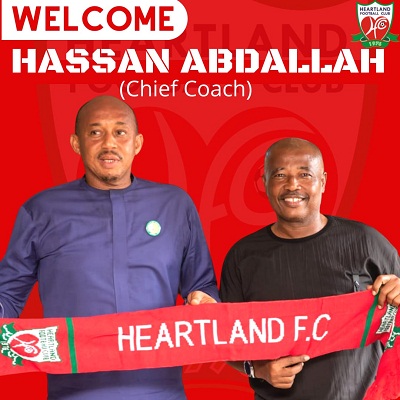 Heartland FC of Owerri yesterday announced the appointment of  Hassan Abdallah as new Chief Coach of the Nigerian top flight giants.
He has signed a two year deal with the Naze Millionaires..
According to a release made available by the club, Coach Abdallah arrives with a rich resume and repotoire of football Knowledge.
The former player for Kano Pillars, Abiola Babes, Ranchers Bees, Gombe United, Sharks, Calabar Rovers, Rangers International among others was unvailed by the General Manager, Promise Nwachukwu and was recieved by the Imo Assembly Deputy Speaker, Rt Hon Amara Iwuanyanwu and the Sports Commissioner, Hon Dan Chike Ogu.
As a Coach he has had stints with Katsina Spotlight, Kano Pillars and the Flying Eagles of Nigeria in 2005.
He asssisted Samson Siasia during the Beijing Olympics in 2008, was also Assistant Coach of U-20 team to the Junior World Cup in 2009 as well as Assistant Coach Super Eagles in 2016.

He served with the U-20 national team at the U-20 world cup in 2019 in Poland as the Scout.
He is currently the chief scout of the U-17 National team (Golden Eaglets)
Coach Hassan Abdallah is in Owerri to meet with players and management.