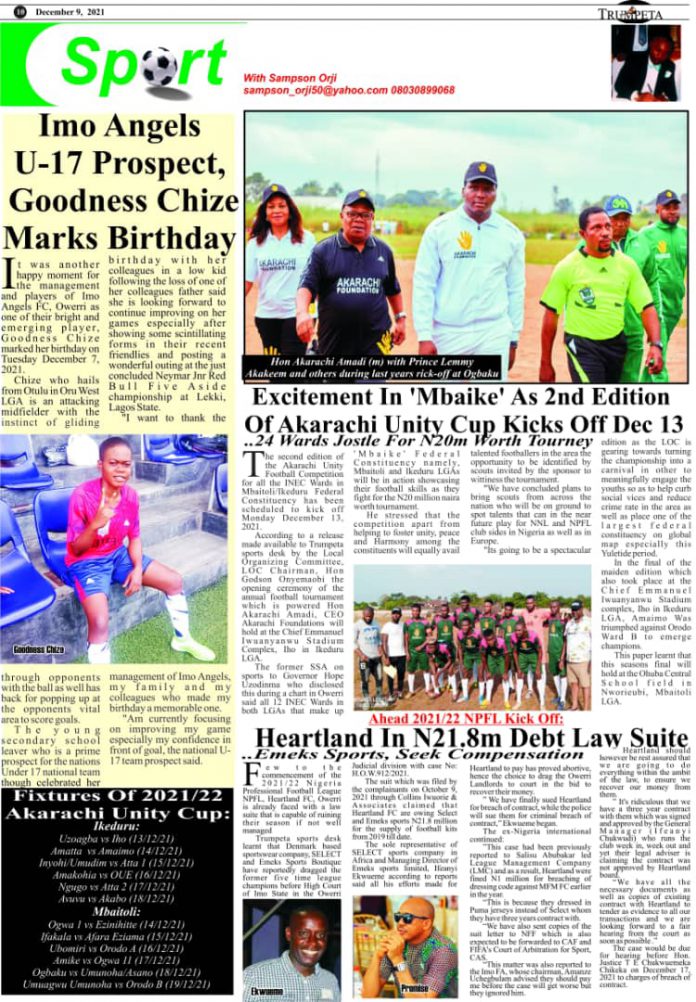 Few to the commencement of the 2021/22 Nigeria Professional Football League NPFL, Heartland FC, Owerri is already faced with a law suite that is capable of ruining their season if not well managed

The suit which was filed by the complainants on October 9, 2021 through Collins Iwuorie & Associates claimed that Heartland FC are owing Select and Emeks sports N21.8 million for the supply of football kits from 2019 till date.

The sole representative of SELECT sports company in Africa and Managing Director of Emeks sports limited, Ifeanyi Ekwueme according to reports said all his efforts made for Heartland to pay has proved abortive, hence the choice to drag the Owerri Landlords to court in the bid to recover their money.

”This case had been previously reported to Salisu Abubakar led League Management Company (LMC) and as a result, Heartland were fined N1 million for breaching of dressing code against MFM FC earlier in the year.

“This is because they dressed in Puma jerseys instead of Select whom they have three years contract with.

“We have also sent copies of the suit letter to NFF which is also expected to be forwarded to CAF and FIFA’s Court of Arbitration for Sport, CAS.

“This matter was also reported to the Imo FA, whose chairman, Amanze Uchegbulam advised they should pay me before the case will get worse but they ignored him.

” Heartland should however be rest assured that we are going to do everything within the ambit of the law, to ensure we recover our money from them.

” It’s ridiculous that we have a three year contract with them which was signed and approved by the General Manager (Ifeanyi Chukwudi) who runs the club week in, week out and yet their legal adviser is claiming the contract was not approved by Heartland board.

“We have all the necessary documents as well as copies of existing contract with Heartland to tender as evidence to all our transactions and we are looking forward to a fair hearing from the court as soon as possible .”

The case would be due for hearing before Hon. Justice T E Chukwuemeka Chikeka on December 17, 2021 to charges of breach of contract.