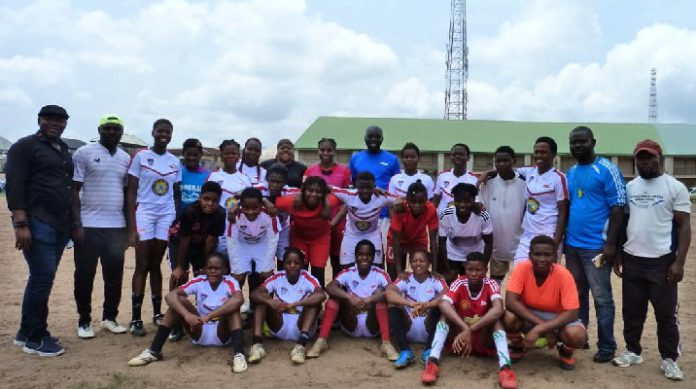 The management of Imo Angels FC has felicitated with Rev Fr Chika Opara on his 18 years of priesthood.

According to a release made available to Trumpeta sports desk by the clubs media, the clubs CEO/Chairperson, Miss Jenny Anusiem eulogised Father Chile for his selfless effort to ensure that the youths in his diocese (Owerri) are on the right path of their lives  through sport, particularly football.

“We at Imo Angels are delight to have come in contact with you within the on year of our existence.

“You have I deed shown that sports particularly football is a divine thing which can be used to win souls for Christ as well as inculcate moral discipline to our youths.

“As you turn 18years on your servant hood in the Lords vineyard, we pray that His Grace, Favour and Care shall continue to be upon you in Jesus name, Amen!

Father Chika who has been an ardent sports lover (football) and administrator which has seen him run several football outfits including; Mali Team in the defunct Owerri Mock Nations Cup Tournament that produced so many players now playing in Europe and in NPFL. He was also major part of Papilo FC team that got promoted to NNL and is currently working with several club proprietors to help encourage talent youths become better professional players and worthy ambassadors of their families.

The Imerienwe in Ngor Okpala LGA born Priest who is also the Sports Director at the Owerri Catholic Arch Dioceses on Monday marked his 18 years of Priest hood.

Meanwhile, Imo Angels FC on Monday December 20, 2021 embarked on yuletide break to resume for the new season by January.

The club gaffer, Sunny Okafor who enjoined the girls to remain worthy representatives of the club during the Christmas and New Year festivities said the team also had a friendly match with a little get together organised d by the team’s management to appreciate the players for their dedication and hard work.

He said the team will resume by January as they hope to take part in the national league.