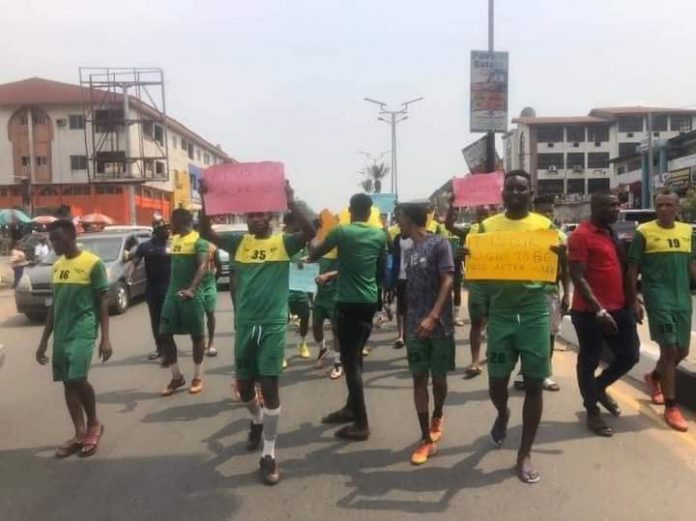 Trumpeta sports desk gathered that five key players of the Owerri based NPFL side were not allowed to play in the derby after their opponents from Umuahia who play their home games in Okigwe successfully appealed for their non inclusion because they were not officially registered in LMC.

Recall that the players few days to the tie had staged a peaceful protested their 11 months unpaid salary/bonuses on the streets of Owerri which they ended at the Government House gate before the management and commissioner for sports, Hon Dan Chike Ogu pleaded with them to calm down after providing about N2m to cover their two match bonuses against Wikki Tourist and Dakkada FC this season while the coaches were not captured.

Speaking shortly after the loss, Coach Hassan Abdallah regretted not having 5 of his key players blaming the loss to their absence.

“As you can see during the game, we played well even without 5 of my key players and you can imagine what the outcome could have been if they were in action”, Coach Abdallah lamented.

Heartland as we learnt had only 3 substitutes on the bench during Sunday encounter at Okigwe, a situation which hampered the gaffer from using his full strength in the game.

It is however feared that the club may suffers same fate when they lock horns with Enugu Rangers tomorrow in another NPFL Oriental derby at the Dan Anyiam stadium, Owerri in one of the match day 7 encounters.