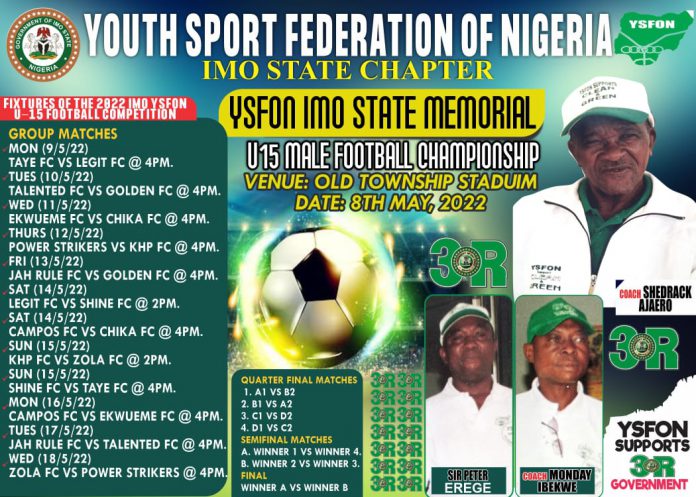 The Youth Sports Federation of Nigeria YSFON, Imo state chapter’s memorial U-15 male football championship has been billed to kick-off on Sunday May 8, 2022.

According to a release made available by the association’s technical committee, the opening ceremony will feature a final of the 2021 U-13 final between Power Strikers FC and Campos FC at the Old Township Stadium, Owerri by 3:30pm.

Reacting on the competition, YSFON Vice President, Mr Sunny Ndubuisi-Opara who doubles the state chairman said YSFON is using the competition to help discover talents that will in the near future become super stars like Kelechi Iheanacho, Kelechi Nwakali among many others who at some point in their teenage age played the tournament.

He averred that this years edition is a memorial one as YSFON Imo Chapter is trying to Honour our fallen heroes who played the game coached the game and produced major stars out of the game.

Mr Opara who also doubles as the Imo FA Technical committee chairman described Coach Peter Erege, Shedrack Ajero and Monday Ibekwe all late as legends noting that the tournament among other programmes is YSFON’s little way of thanking them and their families for their selfless services to the organization, Imo state and Nigeria.

Fixtures For The 2022 Imo YSFON U-15 Football Competition

Winner A vs Winner B

All The Teams And Groups