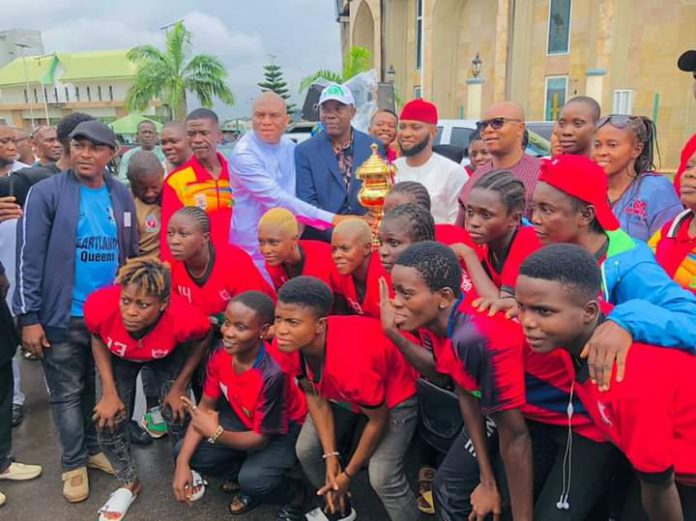 The Deputy Speaker Imo State House of Assembly, Rt Hon Amara Chyna Iwuanyanwu has thumbed up Heartland Queens FC players and management bteam on their Victory at the just Concluded NWFL Championship Held at Ijebuode, Ondo state they by qualifying for the NWFL premiership 2022/23 season.
The Deputy Speaker who also doubles as the Chairman house committee on youths and sports yesterday received the victorious team after they returned back to the state capital of Owerri in the company of the state Commissioner for Youths, Sports and Social Development, Hon Dan Chike Ogu, Commissioner for Commerce and Industr,y Hon Simon Ebegbulem and the Special Adviser on Special Duties to the Governor, Nze Chinasa Nwaneri including management members of of the team. Rt Hon Amara praised the trojan spirit of the newly crowned champions the 2022 Imo FA Cup after defeating Imo Angels FC in the final, urging them to keep making the state proud.
He conveyed the gratitude of His Excellency, the State Governor of Imo State, Sen Hope Uzodinma telling them that the state is proud of their contributions towards the growth of sports in the state and promised to always support them in achieving greater feats.