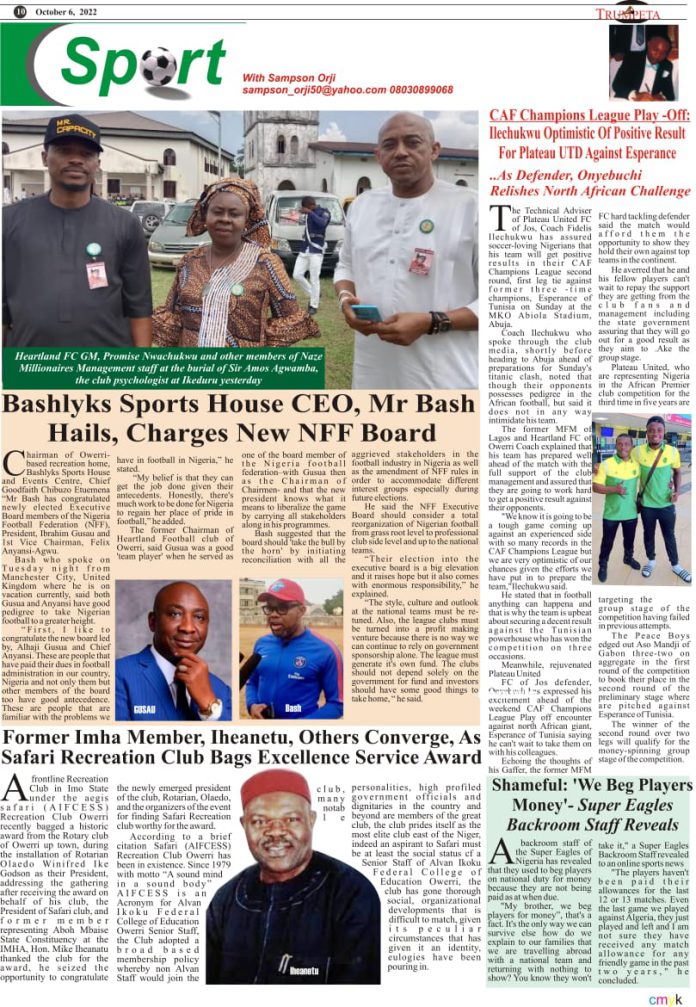 The Technical Adviser of Plateau United FC of Jos, Coach Fidelis Ilechukwu has assured soccer-loving Nigerians that his team will get positive results in their CAF Champions League second round, first leg tie against former three -time champions, Esperance of Tunisia on Sunday at the MKO Abiola Stadium, Abuja.

Coach Ilechukwu who spoke through the club media, shortly before heading to Abuja ahead of preparations for Sunday’s titanic clash, noted that though their opponents possesses pedigree in the African football, but said it does not in any way intimidate his team.

The former MFM of Lagos and Heartland FC of Owerri Coach explained that his team has prepared well ahead of the match with the full support of the club management and assured that they are going to work hard to get a positive result against their opponents.

“We know it is going to be a tough game coming up against an experienced side with so many records in the CAF Champions League but we are very optimistic of our chances given the efforts we have put in to prepare the team,”Ilechukwu said.

He stated that in football anything can happena and that is why the team is upbeat about securing a decent result against the Tunisian powerhouse who has won the competition on three occasions.

FC of Jos defender, Onyebuch has expressed his excitement ahead of the weekend CAF Champions League Play off encounter against north African giant, Esperance of Tunisia saying he can’t wait to take them on with his colleagues.

Echoing the thoughts of his Gaffer, the former MFM FC hard tackling defender said the match would afford them the opportunity to show they hold their own against top teams in the continent.

He averred that he and his fellow players can’t wait to repay the support they are getting from the club fans and management including the state government assuring that they will go out for a good result as they aim to .Ake the group stage.

Plateau United, who are representing Nigeria in the African Premier club competition for the third time in five years are targeting the group stage of the competition having failed in previous attempts.

The Peace Boys edged out Aso Mandji of Gabon three-two on aggregate in the first round of the competition to book their place in the second round of the preliminary stage where are pitched against Esperance of Tunisia.

The winner of the second round over two legs will qualify for the money-spinning group stage of the competition.