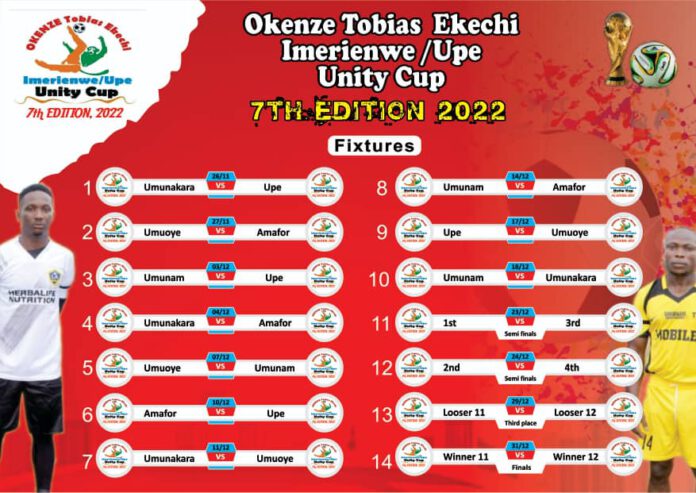 Aigbogun who currently serves as a member of the NFF Technical Committee was the special guest of honour at the final of the 3 -week talent hunt competition which was ably organized by members of the Like -Mindes Fitness Club, Owerri under the leadership of Chuks Dike.

Reacting to journalist after the very entertaining encounter between Ezegbogu Secondary School, Ezinihitte -Mbaise and Comprehensive Secondary School Orji, Owerri -North, the former Enyimba Int’l and Warri Wolves Gaffer eulogized the sponsor and organizers of the tournament for initiating the brilliant idea of tapping raw talents for future.

He maintained that the future of football development in Nigeria lies in the revival of School Sports citing example with the class of “94 and the “Dream Team” in “96 which Mobi Oparaku was a member that they were all products of school sports.

While commending the sponsors of the competition, he urged for sustenance praising the players for exhibiting good technicalities and called on cooperate bodies and well meaning Nigerians to invest in the development of our football especially at the school level which according to him is the nucleus of Grassroots.

In their separate speeches during the presentation of medals and awards, the Director General of Ikukuoma Foundation, Comrade Julius Nnaji said the tournament is in line with what the foundation represents which is nurturing talents to greatness assuring of the continuous support of the foundation while the President of Like -Minds Fitness Club, Owerri Mr Chuks

He further assured that the competition will be an annual project advising the schools to start preparing for the next edition which pointed out will be a full school sports competition with about ten different sports to be added.