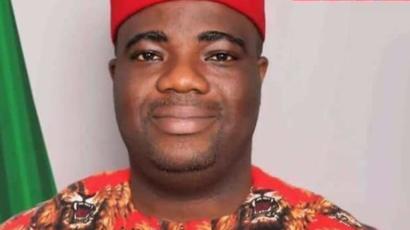 By Okey Alozie
It has become obvious that  the Daniel Nwafor led executives of the All Progressives Congress, APC,  has lost out in the battle for the soul of the party.
Since three years now, Imo APC has been entangled in leadership crisis with two main factions battling for the state Exco.
From ex governor Rochas Okorocha’s camp came Daniel Nwafor who was sacked by the national working committee of the party to put in place that of Coalition loyal to those opposed to the Rescue Missionaries under Prince Marcon Nlemigbo.
But the coming of Uzodinma, the governor from APC party has cemented the authenticity of Nlemigbo as shown in Wednesday’s grand finale of the APC rally for the Okigwe North Federal Constituency election this weekend.
At the rally for Miriam Onuoha, the candidate of the party, Nwafor was missing in action and nowhere to be spotted at the event attended by major APC stakeholders including his backers Okorocha and Uche Nwosu.
Instead it was Nlemigbo and members of his Exco who were present to handle the situation.
In a related development, there were interesting incidents that characterised the outing at Isiala Mbano.
Earlier  a mild drama ensued when one of the leaders of the party in the area took on the former speaker, Rt Hon Acho Ihim. According to the former House of Reps member, Ihim has no bussiness speaking at a rally of APC in the area as he lacked the moral fibre to do so.
Latter attempts to bar some top leaders of the party speak was foiled when Senator Ifeanyi Araraume left the table to the plaform to take over proceedings when it was noticed of a grand design to scheme him and other leaders out from speaking.

Imo Govt Has No Right To Stop Peaceful Really – Iheduru