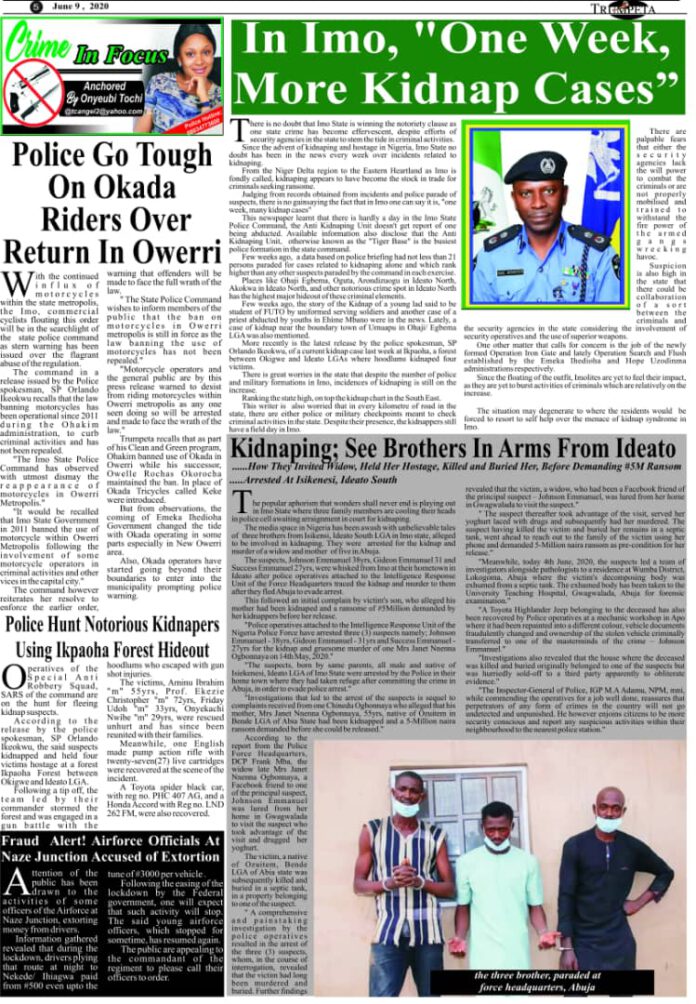 There is no doubt that Imo state is winning the notoriety clause as one state crime has become effervescent, despite efforts of security agencies in the state to stem the tide in criminal activities.

Since the advent of kidnapping and hostage in Nigeria, Imo state no doubt has been in the news every week, over incidents related to kidnapping.

From the Niger Delta region to the Eastern Heartland as Imo is fondly called, kidnapping seem to have been the stock in trade for criminals seeking ransom.

Judging from records obtained from incidents and poice parade of suspects, there is no gainsaying the fact that, in Imo, one can say it is “One week, Many kidnap cases”.

This newspaper learnt that there is hardly a day in Imo state Police command, the anti kidnapping unit doesn’t get report of one being abducted.

Available information also disclosed that, the anti kidnapping unit, otherwise known as the ” tiger base” is the busiest police formation in the state command.

Few weeks ago, a data based on police briefing had not less than 21 persons paraded for cases related to kidnapping alone and which rank higer than any other suspects paraded by the command in each exercise.

Few weeks ago, the story of the kidnap of a young lad, said to be student of FUTO by uniformed serving soldiers and another case of a priest abducted by youths in Ehime Mbano were in the news.

Lately, a case of kidnap near the boundary town of Umuapu in Ohaji Egbema LGA was also mentioned.

More recently, is the latest release by the police spokesman, SP Orlando Ikeokwu of a current kidnap case last week at Ikpaoha a forest between Okigwe and Ideato LGAs where hoodlums kidnapped four victims.

There are great worries in the state that despite the number of police and military formations in Imo, incidences of kidnaping is still on the increase, ranking the state high, on top the kidnap chart in the South East.

This writer is also worried that, in every kilometer of road in the state, there are either police or military checkpoints meant to check criminal activities in the state, despite their presence the kidnapers still have a field day in Imo.

There are palpable fears that either the security agencies lack the will power to combat the criminals or are not properly mobilised and trained to withstand the fire power of the armed gangs wrecking havoc.

Suspicion is also high in the state that, there could be collaboration of a sort between the criminals and security agencies in the state considering the involvement of security operatives and the use of superior weapons.

One other matter that calls for concern, is the job of newly formed operation “Iron Gate” and “Search and Flush” established by the Emeka Ihedioha and Hope Uzodinma Administrations respectively.

Since the outfits, Imolites are yet to feel their impact as they are yet to burst activities of criminals which are relatively on the increase.

The situation may degenerate to where the residents will be forced to resort of self help over the menace of kidnap syndrome in Imo.

Police Go Tough On Okada Riders Over Return In Owerri

With the continued influx of motorcycles within the state metropolis, the Imo, commercial cyclists flouting this order will be in the searchlight of the state police command as stern warning has been issued over the flagrant abuse of the regulation.

The command in a release issued by the Police spokesman, SP Orlando Ikeokwu recalls that the law banning motorcycles has been operational since 2011 during the Ohakim administration, to curb criminal activities and has not been repealed.

“The Imo State Police Command has observed with utmost dismay the reappearance of motorcycles in Owerri Metropolis.”

“It would be recalled that Imo State Government in 2011 banned the use of motorcycle within Owerri Metropolis following the involvement of some motorcycle operators in criminal activities and other vices in the capital city.”

The command however reiterates her resolve to enforce the earlier order, warning that offenders will be made to face the full wrath of the law.

” The State Police Command wishes to inform members of the public that the ban on motorcycles in Owerri metropolis is still in force as the law banning the use of motorcycles has not been repealed.”

“Motorcycle operators and the general public are by this press release warned to desist from riding motorcycles within Owerri metropolis as any one seen doing so will be arrested and made to face the wrath of the law.”

Trumpeta recalls that as part of his Clean and Green program, Ohakim banned use of Okada in Owerri while his successor, Owelle Rochas Okorocha maintained the ban. In place of Okada Tricycles called Keke were introduced.

But from observations, the coming of Emeka Ihedioha Government changed the tide with Okada operating in some parts especially in New Owerri area.

Also, Okada operators have started going beyond their boundaries to enter into the municipality prompting police warning.

Kidnapping; See Brothers In Arms From Ideato
……How They Invited Widow, Held Her Hostage, Killed and Buried Her, Before Demanding #5M Ransom
…..Arrested At Isikenesi, Ideato South

The popular aphorism that wonders shall never end is playing out in Imo State where three family members are cooling their heads in police cell awaiting arraignment in court for kidnapping.

The media space in Nigeria has been awash with unbelievable tales of three brothers from Isikensi, Ideato South LGA in Imo state, alleged to be involved in kidnapping. They were arrested for the kidnap and murder of a widow and mother of five in Abuja.

The suspects, Johnson Emmanuel 38yrs, Gideon Emmanuel 31 and Success Emmanuel 27yrs, were whisked from Imo at their hometown in Ideato after police operatives attached to the Intelligence Response Unit of the Force Headquarters traced the kidnap and murder to them after they fled Abuja to evade arrest.

This followed an initial complain by victim’s son, who alleged his mother had been kidnapped and a ransome of #5Million demanded by her kidnappers before her release.

“Police operatives attached to the Intelligence Response Unit of the Nigeria Police Force have arrested three (3) suspects namely; Johnson Emmanuel – 38yrs, Gideon Emmanuel – 31yrs and Success Emmanuel – 27yrs for the kidnap and gruesome murder of one Mrs Janet Nnenna Ogbonnaya on 14th May, 2020.”

“The suspects, born by same parents, all male and native of Isiekenesi, Ideato LGA of Imo State were arrested by the Police in their home town where they had taken refuge after committing the crime in Abuja, in order to evade police arrest.”

“Investigations that led to the arrest of the suspects is sequel to complaints received from one Chinedu Ogbonnaya who alleged that his mother, Mrs Janet Nnenna Ogbonnaya, 55yrs, native of Ozuitem in Bende LGA of Abia State had been kidnapped and a 5-Million naira ransom demanded before she could be released.”

According to the report from the Police Force Headquarters, DCP Frank Mba, the widow late Mrs Janet Nnenna Ogbonnaya, a Facebook friend to one of the principal suspect, Johnson Emmanuel was lured from her home in Gwagwalada to visit the suspect who took advantage of the visit and drugged her yoghurt.

The victim, a native of Ozuitem, Bende LGA of Abia state was subsequently killed and buried in a septic tank, in a property belonging to one of the suspect.

” A comprehensive and painstaking investigation by the police operatives resulted in the arrest of the three (3) suspects, whom, in the course of interrogation, revealed that the victim had long been murdered and buried. Further findings revealed that the victim, a widow, who had been a Facebook friend of the principal suspect – Johnson Emmanuel, was lured from her home in Gwagwalada to visit the suspect.”

” The suspect thereafter took advantage of the visit, served her yoghurt laced with drugs and subsequently had her murdered. The suspect having killed the victim and buried her remains in a septic tank, went ahead to reach out to the family of the victim using her phone and demanded 5-Million naira ransom as pre-condition for her release.” ​

“Meanwhile, today 4th June, 2020, the suspects led a team of investigators alongside pathologists to a residence at Wumba District, Lokogoma, Abuja where the victim’s decomposing body was exhumed from a septic tank. The exhumed body has been taken to the University Teaching Hospital, Gwagwalada, Abuja for forensic examination.”

“A Toyota Highlander Jeep belonging to the deceased has also been recovered by Police operatives at a mechanic workshop in Apo where it had been repainted into a different colour, vehicle documents fraudulently changed and ownership of the stolen vehicle criminally transferred to one of the masterminds of the crime – Johnson Emmanuel.”

“Investigations also revealed that the house where the deceased was killed and buried originally belonged to one of the suspects but was hurriedly sold-off to a third party apparently to obliterate evidence.”

“The Inspector-General of Police, IGP M.A Adamu, NPM, mni, while commending the operatives for a job well done, reassures that perpetrators of any form of crimes in the country will not go undetected and unpunished. He however enjoins citizens to be more security conscious and report any suspicious activities within their neighbourhood to the nearest police station.”

Attention of the public has been drawn to the activities of some officers of the Airforce at Naze Junction, extorting money from drivers.

Information gathered revealed that during the lockdown, drivers plying that route at night to Nekede/ Ihiagwa paid from #500 even upto the tune of #3000 per vehicle .

Following the easing of the lockdown by the Federal government, one will expect that such activity will stop. The said young airforce officers, which stopped for sometime, has resumed again.

The public are appealing to the commandant of the regiment to please call their officers to order.

Operatives of the Special Anti Robbery Squad , SARS of the command are on the hunt for fleeing kidnap suspects.

According to the release by the police spokesman, SP Orlando Ikeokwu, the said suspects kidnapped and held four victims hostage at a forest in Ikpaoha, between Okigwe and Ideato LGA.

Following tip off, the team led by their commander stormed the forest and was engaged in a gun battle with the hoodlums who escaped with gun shot injuries.

Meanwhile, one English made pump action rifle with twenty-seven (27) live cartridges were recovered at the scene of the incident.

A Toyota spider black car with reg no. PHC 407 AG and a Honda Accord with reg. no LND 262FM were also recovered.