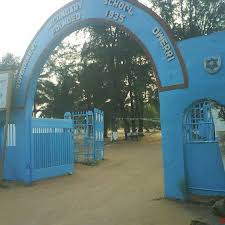 BY Okey Alozie
The Commissioner for Education Imo State, Prof B.T.O Ikeagwuoha yesterday announced that Government Secondary School Owerri is now the best Second School in Nigeria.
He made this Declaration on Thursday in Owerri Imo State Capital during a Public Function.
According to the Commissioner, the Presidency has already given Award to the School Principal, Rev Jamike Eke.
We were told that the presidential monitoring team came for inspection recently and shortlisted Government College among the best and after due consideration it was finally declared that Government Secondary School Owerri  is the Second best School in Nigeria. The Teachers and Principal were seen celebrating yesterday.
The Governor of Imo State Senator Hope Uzodimma also sent his Congratulatory Message to the school through the Hon. Commissioner for Education Prof B.T.O Ikeagwuoha who visited the School on Thursday.
Government College Secondary School Owerri competed in the National award and almost came first in the Competition. The Federal Government saw the Performance of the School and became highly impressed.
The Minister incharge of Education in Nigeria Adamu Adamu will visit Imo State today Trumpeta learnt, to give more Kudos to Government Secondary School Owerri.
The Principal Rev. Jamike Eke praised God for the award. Jamike was also declared the second best Principal in Nigeria because of his outstanding performance.