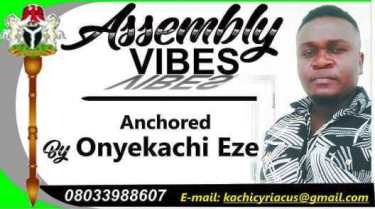 The aspiration of an Imo State born academia and tecnocrat, Amb. Prof. George Obiozor, to pilot the affairs of Ohaneze Ndi Igbo, as its next President, has recieved a great boost, following a backup by the State Legislature.

This was disclosed during the yesterday’s plenary session, presided by the Speaker, Rt. Hon. Paul Emeziem.

The House gave their nod on the ambition of Amb. Obiozor, to succeed the incumbent President, Chief Nnia Nwodo, as his tenure draws to an end.

In a motion moved by the Deputy Speaker, who also represents Nwangele State Constituency in IMHA, Rt. Hon. Amarachi Chyna Iwuanyanwu, the House resolved to give full support to the nomination and possible enthronement of Chief George Obiozor.

Hon Iwuanyanwu recalled that on November 22, 2020, prominent Imo sons, led by Chief Emmanuel Iwuanyanwu led a delegation to the State Government House to present to the Governor, the consensus candidate for the Ohaneze Ndi Igbo President.

He added that there, Amb. Obiozor was given a scorecard to man the job, after Nnia Nwodo tenure must have ended by next month.

The Deputy Speaker averred that having assessed the leadership tenacity and pedigree of the Oru East born former Nigerian Ambassador to USA, Israel, Cyprus, the leaders, devoid of political sentiments unanimously agreed to give Amb. Obiozor their backing.

Amara Iwuanyanwu further opined that Obiozor represents light to both past and the future.

The House members in a resolution gave their reasons for supporting Professor George Obiozor, which included his tactfulness, diplomacy, accommodating, and determined to unite Ndi Igbo for a common goal.

Part of the prayers of the motion read; “Whereas Ndi Igbo for long have been misunderstood and misrepresented in every sphere of life before other Nigerians and there’s need for Ndi Igbo to be well represented in the scheme of things as it relates to National Politics;

“Noting that Ohaneze Ndi Igbo serves as a focal point of reference, direction and collective leadership in matters affecting the interest, solidarity and general welfare of Ndi Igbo”.

In their support to the motion, member for Ideato South, Hon. Johnson Iheonukara Duru stated that Obiozor has paid his dues, and as such stands tall for the position.

Hon. Dominic Ezerioha (Oru West), said the emergence of Obiozor for the headship of Ohaneze Ndi Igbo would be Placing the State to a global world map.

“As a Legal Adviser of Ohaneze Ndiigbo in Abuja, I can comfortably say that the cap fits Amb. George Obiozor”, Ezerioha said.

The member representing Owerri North State Constituency, in Imo State House of Assembly, Hon. Engr. Philip Ejiogu has added more feathers to his cap, as he has been inducted into the 2020 Fellowship Hall of Fame of the Chartered Institute of Public Resources Management And Politics, Ghana.

He was inducted on Tuesday, November 24, 2020, at the State Assembly complex, Owerri, Imo State, and conducted by representatives of the Governing Council of the Institute.

Apart from his investiture, he was issued with a prestigious award of excellence by the International Institute for his incorruptible track records.

Hon Philip Ejiogu is the second Lawmaker in Nigeria to be decorated, after the Oyo State youngest Speaker.

Trumpeta Newspaper learnt also that In Imo State, he takes the third position to be inducted into the institute, after the State Attorney General, Barr. COC Akaolisa, and Chief Felix Idiga (JAFAC).

He disclosed that for over two years of beaming their searchlight on Ejiogu, they found him as a man of integrity, judging by his leadership milestone in Governance.

“This institute also admires your staunch advocacy for transparency, accountability in Leadership and Governance”.

“This Fellowship honour is bestowed on citizens of all Nations especially those who have proven themselves as embodiment of Integrity. We can assure you sir, Hon. (Engr.) Philip Ejiogu, that your selfless services and proven professionalism over the years have been particularly recognized by this Chartered Institute”.

Dr. Richards continued, “History is made and a golden record of unrivalled service delivery has been recognized in the Imo State House of Assembly as Hon. Philip Ejiogu, gradually leaves indelible footprints in Nigeria Legislative landscape for posterity”.

He therefore advised the latest Fellow to always uphold good moral standards that have earned him the honour.

Responding, Hon. Philip Ejiogu who thanked God for the opportunity, also extended gratitude to the Institute for finding him worthy.

He expressed gratitude to his family, and Constituents for also trusting in him, by entrusting their mandate in his care.

Meanwhile, Ejiogu affirmed that indeed, one has to be careful with his dealings, especially with the public as people may be watching and taking stock.

The IMHA House Committee Chairman on Education and Deputy Minority Whip promised to be a good Ambassador, living up to expectations.
He added that the induction and accolades would spur him to do more for promotion of humanity.

The Clerk of the House, Barr. Chinelo Emeghara, and Campaign Director of Philip Ejiogu were there to welcome the guests from far away Ghana.

Newly inaugurated Speaker of the Imo State House of Assembly, Rt. Hon. Paul Emeziem has urged Journalists attached to the Assembly complex to always be objective in their reportage.

He also reiterated his penchant for Journalists, by assuring that he would remain a media friendly Speaker.

Emeziem made the disclosure last week Wednesday, after a familiarization meeting with Correspondents of the State House of Assembly.

The Speaker, who represents Onuimo LGA, opined that before his emergence as Speaker, he had been a lover of the Press.

He added that he loves the Journalist more if all the reports published were factual, without any trace of falsehood.

Emeziem disclosed that the Press is a very vital organ that disseminates information, hence, his readiness to partnering with Journalists attached to the State Assembly.

He seized the opportunity to canvas for support for the Governor, Senator Hope Uzodinma, stressing that he come to work, and as such, should be given the full support.

The Deputy Speaker, Rt. Hon. Amarachi Chyna Iwuanyanwu, Clerk of the House, Barr Chinelo Emeghara, were present at the meeting.

A bill for a law to abolish the Osu Caste system, by prescribing stringent punishment both for the practice thereof and the enforceability of any disability arising therefrom and for purposes connected therewith, has passed its second reading in the Imo State House of Assembly.

The bill is chiefly sponsored by the Member representing Ideato North State constituency who doubles as the Chief Whip of the 9th House, Rt. Hon. Innocent Arthur Egwim.

Passing through its second reading at the floor of the House yesterday, Egwim revealed that as a titled man and full fledged free born of Isiokpo community, he doesn’t support illegality or infringement of any kind.

He described the osu caste system as a mere act, fashioned out to witch-hunt some individuals in the society.

Hon. Egwim added that he contested for the State House of Assembly because of the issue of Osu caste system, in order to do away with the infringements it comes from.

He added that “Osu” means nothing from an indepth look, but an avenue where vulnerable persons are served by morally corrupt individuals with high level of injustices.

However, he expressed optimism that by the time it is passed into law, the society will live in unity and togetherness, devoid of rancour and social stratification.

2023:The Marginalization of the South East By Anambra State