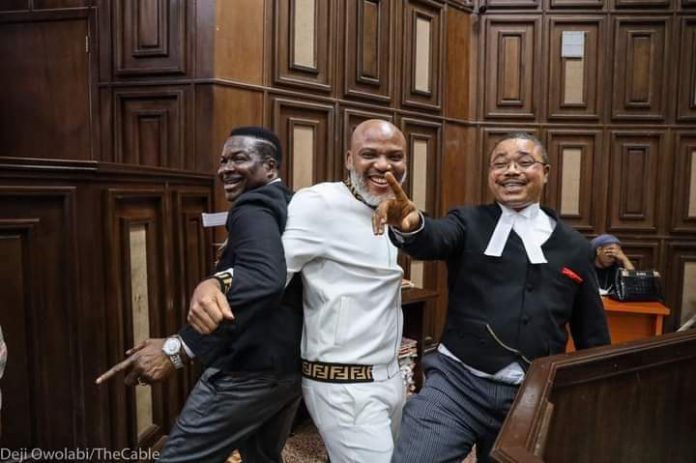 The expectations of the members of Indigenous People of Biafra, IPOB that their Leader, Nnamdi Kanu will gain freedom was dashed on Wednesday as a Federal High Court sitting in Abuja refused to grant bail to the Self- determination Exponent.

When the case was called up in the court presided over by Justice Binta Nyako yesterday, the judge averred that the defendant should account for the disobedience of the first bail granted him, before the court could afford to hand him another.

The court disagreed with Nnamdi Kanu that he did not disobey the first Bail granted him by fleeing the country (Nigeria) because armed soldiers stormed his ancestral home in Umuahia, Abia State, therefore escaped to allow harm happen to him.

“Kanu must account for his whereabouts for years when he was granted bail but refused to attend Court for trials” the court said.

However, the court struck out a six-count amended charges brought against the IPOB leader by the Federal Government, as the judge averred that fresh charges could not be accommodated since it was discovered that the trial cannot be opened when a previous charge is pending.

It was recalled that the Federal Government had in 2015 amended the charges against Kanu six times since the arrangement.

Reacting to the development, Nnamdi Kanu’s special counsel, Aloy Ejimakor said that a ruling by an Abia State High Court sitting in Umuahia had exonerated Kanu of jumping bail, pointing out that Justice Nyako’s court refusal of bail would proceed from the Abia Court ruling on the matter.

Ejimakor said “She (Justice Nyako) denied the bail application, but she also ruled that Kanu can reapply for bail within an explanation of why he did not attend court in 2017. This is where the Abia judgment will come into play”.

He went on “The Initial application (the one denied today) was filed before the Umuahia judgment that impliedly exonerated Kanu from the notion he had jumped bail in 2017. Very significant. It is the only basis upon which the bail application can proceed”

The matter was adjourned for further hearing.