The State Governor, Owelle Rochas Okorocha has approved the appointment of 6 nominees for Imo State Independent Electoral Commission. The list has been sent to the State House of Assembly for screening and confirmation. A letter signed by the Secretary to the Government of Imo State, Prof. Anthony Anwuka says the nominees are Barr. Teddy Akwari from Ideato-south local government area who will serve as the Chairman of the Commission, Dr. Godfrey Nwosu from Ehime mbano, Dr. Anosike Kirina from Aboh-mbaise and Hon. Godfrey from Ikeduru local government area will serve as members. Others are Barr. Mrs. Ezike from Orlu and Barr. Emma from Ideato-north local government areas.

The House Majority leader Mrs. Adaku Iheoma is to chair the committee made up of Barr. Simon Iwunze, Chief Stan Dara and Prince Robertson Ekwebelam. The Ad-hoc committee has two weeks to submit its reports for deliberation at the committee of the whole house.

Similarly Governor Okorocha has approved the appointment of Mrs.Ugo Anyawu as the Auditor General of the State.

The Secretary to the Governor of Imo State Prof Anthony Anwuka has sent the letter to the Speaker of the House of Assembly Chief Benjamin Uwajumogu who has set-up a three member Ad-hoc committee to screen the appointee nominee.

The Chairman public account committee of the House, Chief Victor Ndunagu is to head the Ad-hoc committee with Barr. Mrs. Ngozi Pat Ekeji and Chief Achu Ihem serving as members. The committee is to submit its findings today for consideration at the committee of the whole House. 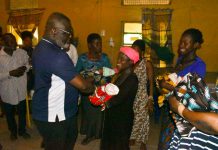